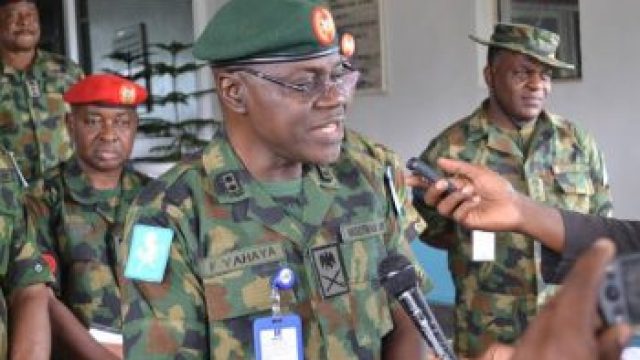 The Chief of Army Staff (COAS), Lt. Gen. Faruk Yahaya has emphasised that sports is one key element required by troops to boost their mental and overall fitness as combatants, saying that the act is significant for a healthy lifestyle for military personnel.

He said he has always thought it necessary to improve the sporting activities in all barracks since assuming office as the Chief of Army Staff.

Gen. Yahaya stated this on Tuesday during the commissioning of the Rhino Gymnasium and Swimming Pool at the Maxwell Khobe Cantonment, Rukuba Barracks near Jos.

While commissioning the ultramodern edifice, the Army Chief said the sporting facilities will to a large extent complement government efforts towards the provision of qualitative welfare services for the Nigerian Army personnel and the larger Nigerian society in the area of sports and keeping fit.

“There is no doubt that sports is a requisite in building mental and physical fitness and for troops of the Nigerian Army having the opportunity to a regular exercise in the new sporting facility in the barracks will certainly take advantage of it to boost their energy and capabilities to make them combatant ready at all times”, Yahaya said.

Represented by the Chief of Army Standard and Evaluation, Maj. Gen. Sani Mohammed, COAS added that being physically fit improves the brain, manages weight and reduces the risk of diseases as well as improves the ability to do everyday activities.

“With the commissioning of this beautiful edifice, many of our personnel and their dependents who had to drive downtown to exercise will find happiness and joy in coming to the gym here. I can assure you that this is the best gymnasium on the Plateau”, Yahaya assures.

In his remarks, the General Officer Commanding, 3 Division Nigerian Army and Commander Operation Safe Haven (OPSH), Maj. Gen. Ibrahim Ali, said it was an honor to see the project completed under his watch.

Gen. Ali said the idea to construct the gymnasium and swimming pool like most of the projects initiated under his Command as GOC 3 Div and Commander OPSH was to promote a healthy lifestyle among troops and their families.

According to him: “Just one year four months ago, precisely on 29 September 2021, our amiable leader the Chief of Army Staff laid the foundation stone for the construction of this Rhino gymnasium and has also executed a lot of projects in the Division.

“This can only be Possible through a visionary leader that has the welfare of  his followers at heart.

Ali lauded the COAS for all the support given him, adding that he will always remain indebted to him for his kind gesture.

Earlier, the Chief of Army Staff lauded Ali for his visionary leadership and laudable achievements recorded during his tenure in 3 Div’ and OPSH, saying “as you proceed to take over your new appointment, I wish you success”