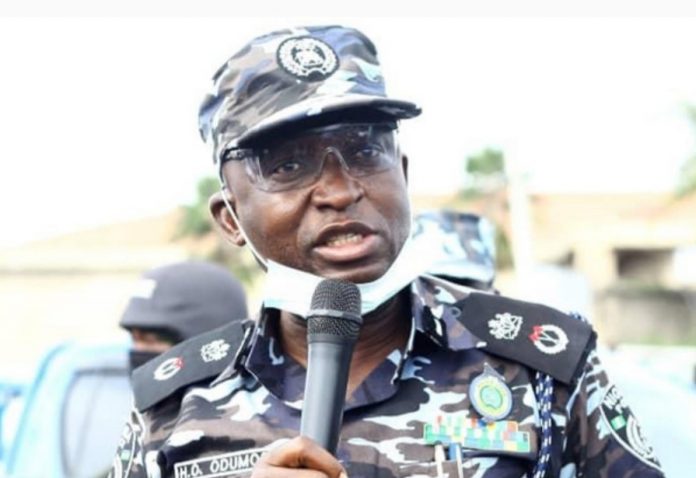 The Lagos State Commissioner of Police, Hakeem Odumosu has warned Chief Sunday Igboho and Prof. Banji Akintoye to stay away from the state or face possible arrest.

Odumosu who stated this on Thursday during a press conference warned that no rally will be allowed, under whatever guise, in any part of Lagos State, warning Sunday Igboho and his followers against staging any rally in the state.

“Lagos State cannot afford to experience any security lapses, breakdown of law and order and threat to public peace at the moment, considering the negative effects and reoccurring agonies of the October, 2020 violent #Endsars crisis that led to massive destruction of public and private facilities while some Police personnel paid the supreme price.

According to Odumosu, an intelligent report available to the Police indicated that some disgruntled elements have perfected plans to infiltrate the ranks of the protesters and cause more mayhem and seize the opportunity to attack and loot properties of law-abiding citizens of the state.

Odumosu called on the public and all law-abiding people of Lagos State to go about their normal daily activities as the Police Command and other security agencies had, as usual, put measures in place to provide adequate and water-tight security for all and sundry in the state.

Meanwhile, Sunday Adeyemo aka Sunday Igboho, has suspended the Yoruba Nation rally scheduled to hold in Lagos on Saturday.

He told BBC News Pidgin in an interview monitored by National Daily that the rally in Lagos has been suspended.

The suspension came hours after his residence in Soka area of Ibadan, Oyo State capital was attacked by gunmen.