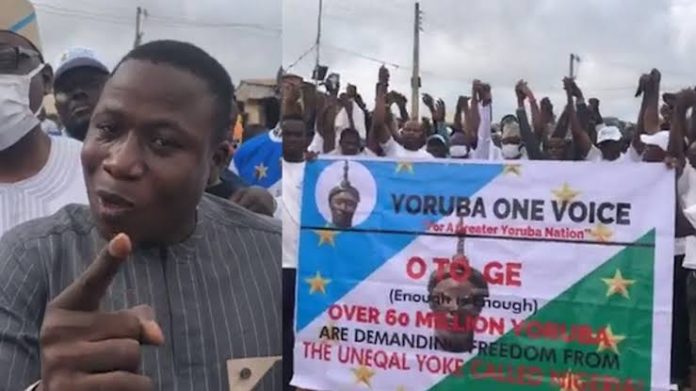 The Yoruba activist, Sunday Adeyemo, widely known as Sunday Igboho, on Saturday boosted the rally organized by Youths in Osun State to press home the agitation for the independence of Oduduwa country out of the present Nigeria.

Igboho had joined agitators at the Nelson Mandela Freedom Park, Oshogbo, Osun State, to encourage the youths to intensify activities for the actualization of the sovereign state of Oduduwa in Yoruba Nation.

Igboho further called on the nigerian government to release members of the Oodua Peoples Congress (OPC) who were detained for arresting a notorious Fulani herder, Iskilu Wakili, in Ibarapa, Oyo State, after years of terrorizing the Yoruba people in the community.

Sunday Igboho had also threatened that the 2023 general elections may not be conducted in the Yoruba nation.

Several people in Osogbo had taken to the streets in the early hours of Saturday expressing their demands for the Yoruba nation, Oduduwa.

There was heavy presence of security personnel at venue of the rally which included the Nigeria Police Force, the Nigeria Security and Civil Defence Corps. However, there were no confrontations or harassment by the security operatives.

The agitators were dressed in t-shirts with the inscription – Yoruba Nation.  They had gathered at the November 27 Bridge, from where they proceeded to Nelson Mandela Freedom Park, Osogbo.

The agitators under the aegis of Omo Oduduwa United held mass procession on the streets of Oshogbo through Ogo-Oluwa, Aregbe junction, Fakunle, Ola-Iya, and Odi Olowo, before they assembled at the freedom park to declare their demands to the world.