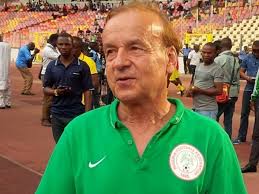 Super Eagles coach, Gernot Rohr, has expressed his admiration for the Croatia team but says the Eagles will give them a good fight when they meet in the opening Group D game on Saturday.

Rohr dropped the hint this morning during Eagles first press conference, since arriving in Russia for the World Cup,National Daily learnt.

“We admire this team, but, we do not plan to watch them when we play against them, we hope to fight. They are all wonderful players playing in biggest teams in Europe”.

“On paper with their names, the Croats are much better than us, but, sometimes on the pitch, it could be different. We don’t have their big stars, but, we try to play collectively with our young team”.

Rohr also disclosed that Tyronne Ebuehi has returned to full training after he suffered a nose bleed from yesterday’s training.

“He’s fit and there are no injury problems in the team,” confirmed Rohr .