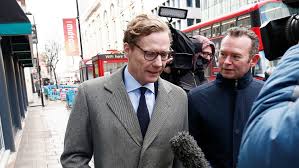 Lawmakers in the United States and Europe are demanding to know more about Facebook’s privacy practices after a whistleblower said Cambridge Analytica improperly accessed data to target U.S. and British voters.

The session will be Nix’s second appearance before the committee and is likely to take place on April 17.

The perceived espionage activities of Cambridge Analytica have been generating concerns across the world.

There is still a pending case In Nigeria that an Israeli company, Black Cube, hacked private health data from Nigerian President Muhammadu Buhari. Black Cube was one of the companies linked to SCL, the parent company for Cambridge Analytica.

Christopher Wylie, a former Research Director at the parent company for Cambridge Analytica was gathered to have revealed the secrets of his former employer around the world in a testimony before a committee of British Parliament on Tuesday.

Wylie was the whistleblower who first exposed details on how Cambridge Analytica improperly used Facebook data of millions of user to influence the presidential election in the United States in 2016.

The company was led in part by Steve Bannon and worked for the Trump campaign’s digital operation.

Wylie was said to have disclosed that the Canadian-based company that worked on Brexit, AggregateIQ, was a “franchise” of SCL and built the software that Cambridge Analytica and others used for its election operations.

The company had previously been involved in Nigerian elections, he said, and had an Israeli company called Black Cube hack private health data from current Nigerian President Muhammadu Buhari.

Undercover footage aired by the UK’s Channel 4 also showed now-suspended Cambridge Analytica leader, Alexander Nix, who said that his company could use prostitutes to entrap candidates.