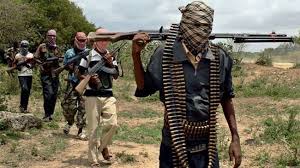 Boko Haram terrorists in a gun battle in Cameroon on Tuesday inflicted serious injuries on at least three Cameroonian soldiers near a border town with Nigeria.

The gun battle occurred in a rural community, Woromari, in the district of Fotokol in Cameroon’s far north.

Fotokol is located along the border of Nigeria and Cameroon and had witnessed many terror attacks that left many people dead since 2014 when Abubakar Shekau’s men began bombing and burning villages in the African sub region.

The Boko Haram terrorists were said to have engaged the Cameroonian soldiers in the fierce gun battle with high caliber fire force that was difficult for the soldiers to overcome. It was not clear if there was any causality on the side of the terrorists.

It was gathered that over 2000 Cameroonian civilians have been bombed to death, shot or beheaded by the Nigeria-based terror organization since 2014.

Boko Haram terrorists who began violence uprising in Nigeria in 2009, have unleashed unprecedented violence in the North East, Nigeria, leading to millions of internally displaced people in the country.