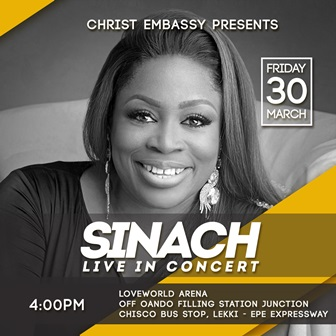 After a successfull international outing that included sold-out shows in London, Birmingham and Glasgow. Nigeria’s leading gospel female act, Sinach, is now set to bring her blissful impact to the nation. It was in her UK tour, the award winning singer and songwriter unveiled plans to bring her “Sinach Live in Concert” experience to Lagos.

Hosted by Christ Embassy and SLIC Inspire, The Sinach Live in Concert Experience is slated to hold on March 30 at Loveworld Arena, off Oando filling station junction, by Chisco bus stop, Lekki-Ajah Expressway at 4 pm. Although she hasn’t revealed whether or not, she would be performing alongside other gospel artistes, we know that whatever we are served that day would be the best of experiences. There is one thing we can be so sure about, regarding this concert – it will be an evening that you’ll truly never forget. Really and truly, there’s no better way to celebrate that one event that defines the essence of Christianity; the death, burial and resurrection of Jesus. Sinach is definitely set out on a course of giving back to all her fans via her Sinach Live In Concert tour and also to affirm to the world that really and truly, Gospel Music can never die.