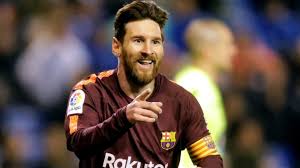 Cesc Fabregas believes Lionel Messi is now a ‘more complete player than ever’ at the age of 32.

The pair know each other well, having grown up playing together in Barcelona’s famed La Masia youth academy from the age of 12-16, before they were later reunited at the club in 2011.

Despite not winning the much-coveted Ballon D’or prize – given to the world’s greatest footballer – since 2015, Messi is widely regarded as the best to have ever graced the game.

And Fabregas feels he is only getting better.

Fabregas, who now plays for Monaco, told Goal , “That’s the thing with Leo, he reinvents himself season after season.

“Maybe he is not the player who dribbles past three, four or five players and score an outstanding goal any more.

“Instead, now, he prefers to do 50-yard passes, leaving Jordi Alba one-versus-one with the goalkeeper.

“He sees one-twos around the box, he might do a chip and an assist… I think now he is more complete than ever.”

Fabregas went on to join Arsenal at 16, before his move back to Barca in 2011 gave him the opportunity to play with Messi again.

They won several trophies together, including the La Liga title and the Copa del Rey, during Fabregas’ second spell with the Catalan club, before he departed for Chelsea in 2014.

Messi has since gone on to collect five Ballon Dor titles, breaking Barcelona scoring records in the process.

He notched an impressive 51 goals last season as Barca narrowly missed out on the treble.

His success with his club side has never quite been repeated at international level however.

Messi captained his country to the World Cup final in 2014, but they just fell short, losing to Germany by a goal-to-nil after extra time.

Then FIFA president Sepp Blatter has since revealed that Messi was his own harshest critic, even in the immediate aftermath of the match.

“Messi was talking to himself,” Blatter told Argentine publication La Nacion (per Goal ) .

“He said to himself over and over again: ‘The best but not the champion.'”