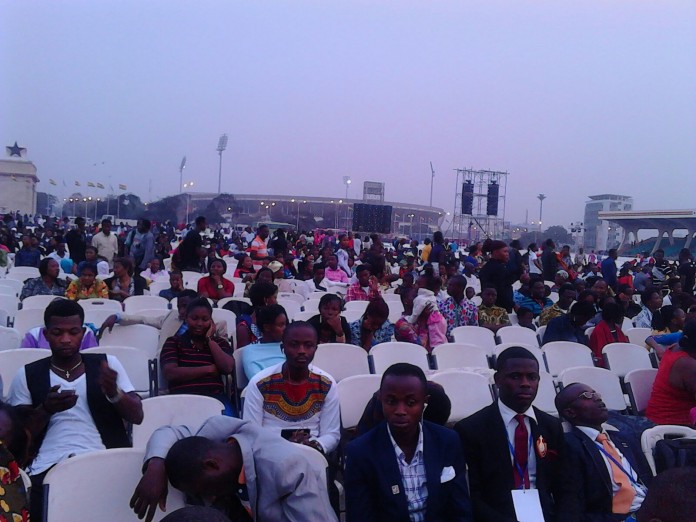 Thousands of worshippers have began to arrive the Black Star Square  (formerly Independence Square) venue of the much-awaited Night of Bliss Accra with Pastor Chris.

National Daily crew at the venue can report that the ground is almost filled to capacity by 10am for the meeting that is billed to commence today Friday February 5, 2016 by 4pm till dawn.

It was gathered that attendees started arriving as early as 10pm on Thursday, February 4th for the programme. According to eyewitnesses every effort to convince the early birds to go and return on Friday were not acceptable to the ecstatic crowd who said they had travelled long distances for the meeting with the Man of God.

As at 10am this morning security agencies were seen working hard to control the sea of people who were coming into the venue.

Already, the Ghana Police have issued a statement informing the public of the various traffic diversions to enable it cope with crowd control.

According to sources in the Ghana Police, information reaching the Police suggests that they are likely going to have the biggest single crowd in the history of our country for one meeting, hence the decision.

The Greater Accra Regional Police Command has served notice that certain roads in Accra will be closed to traffic temporarily on 5th February ahead of the ‘Night of Bliss’ event which is being organized by renowned Pastor Chris Oyakhilome of Christ Embassy Church at the Black Star Square.

The roads which will be closed from midday include: 28th February road at the CEPS Headquarters traffic light, Starlets ‘91’ road, at the Ministries traffic light, Castle Road, at AU Circle towards the State House, Starlet ‘91’ road from Osu Cemetery traffic light to the Black Star square and Labone Junction towards Osu.

A statement released by the Public Relations office of the Police Command requested motorists to observe the arrangements and plan for alternative routes before embarking on their respective journeys.

It added that Police personnel will be positioned at vantage points to assist with traffic direction and diversions for a successful event.

The Night of Bliss Accra with Pastor Chris is a life changing, destiny transforming encounter with the miraculous.

It will be recalled that Pastor Chris Oyakhilome a fortnight ago held a similar meeting at the FNB stadium in Johannesburg, South Africa with several thousands in attendance packing out the largest stadium in Africa and 4th largest in the world.

Just like others, these special meetings are characterised by the miracles of salvation, healing, deliverance and special blessing for all in attendance.