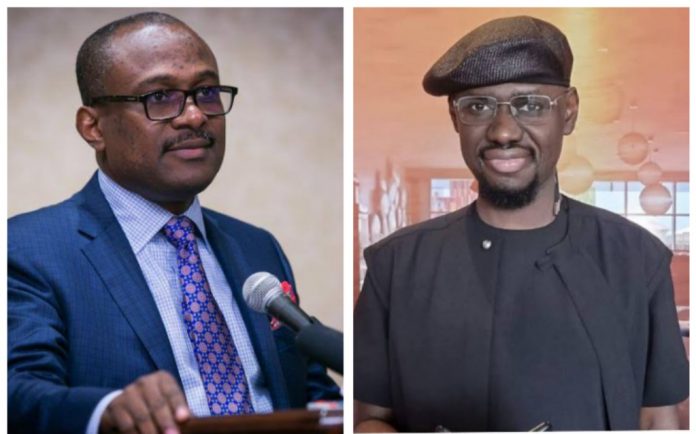 TIMI Frank, a former deputy national publicity secretary of the All Progressives Congress, APC, and the Executive Secretary for the Nigerian Content and Development Board, Simbi Wabote are trading words over an alleged breach of code of conduct leveled against the former.

On Wednesday, Frank had urged President Muhammadu Buhari to sack Wabote over his alleged breach of Code of Conduct for public officers in the country, an allegation Wabote strongly denied.

Frank in a statement stated that Wabote recently admitted before an American Court to operating foreign bank accounts with Bank of America and HSBC Dubai.

According to Frank’s allegation, Wabote and his attorneys had in response to Interrogatory #11 admitted the illegality on record while being cross-examined by a defense counsel in a libel case he (Wabote) instituted against Jackson Ude, a journalist, in a United States District Court, Eastern District of Pennsylvania.

Frank wrote that the admission by Wabote is a direct breach of Part 1, Section 3 of the Fifth Schedule to the 1999 Constitution (as amended) which bars public officers from operating foreign bank accounts.

Frank, who is the United Liberation Movement for West Papua, ULMWP, Ambassador to East Africa and Middle East, also accused Wabote of spending taxpayers’ money to pursue a personal cause in the United States, an act he described as dishonorable and illegal, calling on led on relevant committees of the National Assembly, the Economic and Financial Crimes Commission and the Code of Conduct Bureau to investigate and prosecute Wabote over the apparent constitutional violation.

However, Wabote in his initial reaction said: “God, this is rubbish. I do not have any foreign account and never admitted such. I will share the transcript with you when it is out. They did not even ask for any foreign account in my six hours deposition. These are sinking guys looking to hold on to any straw. Sad and sad indeed. They know they are losing so they have resorted to media trials and war.