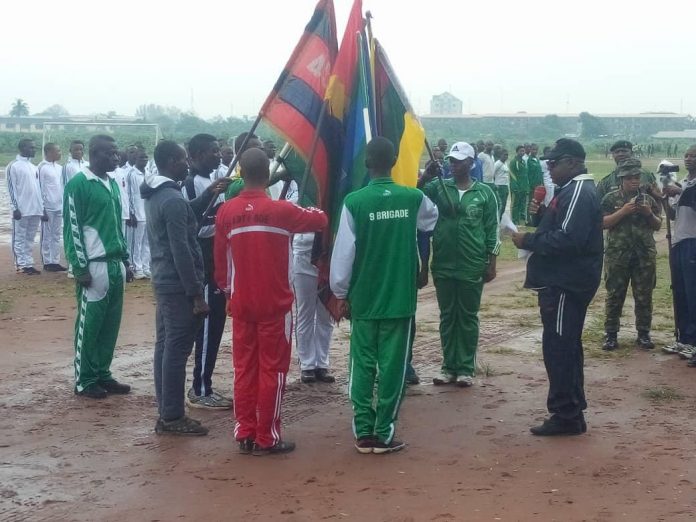 Share this on WhatsApp
Spread the love
The General Officer Commanding (GOC), 81 Division, Nigerian Army, Major General Musa Yusuf on Monday said that for any profession to be proficient in the discharge of its duties especially the Nigerian Army, it must take the training of its personnel very important.
Speaking while declaring opened the 81 Division Inter-Formation/Units  Sports Week, 2019 at the Lt Gen Tukur Buratai’s Sports Complex at Ikeja Cantonment, noted that the relevance of training in the army cannot be overemphasized particularly now that the country is faced with security challenges.
Gen Yusuf said, “To maintain a professionally responsive Nigerian Army in the discharge of its constitutional roles, require that personnel are trained to improve their quality and professionalism.
He observed that in compliance with this, “the Chief of Army Staff, placed very high premium on training which is reflected in the COAS directive for the year 2019 and in furtherance of this, 81 Division’s training directive also laid emphasis on realistic training.”
Dressed in white track suit, Gen Yusuf, reiterated that apart from using sports to foster good comradeship, the primary goal of the competition was directed at accessing physical and mental fitness of troops.
In addition, he pointed out, it would also offer an opportunity to identify new talents that would strengthen the division’s team for future sports championship.
“These events were particularly selected to ensure discipline, physical and mental fitness as well as combat efficiency of the officers as individuals and formations as a whole.
Earlier in his welcome remarks, the host Commanding Officer, 9 Brigade, Ikeja Cantonment, Brig Gen Nasiru Jega expressed the importance of sports in the life of officers and soldiers.
He noted that the idea behind such sport events was to enable formations and units select the best, most credible and talented personnel that would represent the Division in future sports championship.
It was further gathered that the participating formations included the 81 Division Garrison, Dodan Barracks, 9 Brigade, Ikeja Cantonment; 35 Artillery Brigade, Abeokuta; 55 Signal Brigade; 45 Engineer Brigade; 243 Battalion, Badagry; 65 Battalion, Bonny Cantonment; 81 Division Supply & Transport and 1040 Division Workshop.
In addition, Football, Volleyball, Sqaush, Table Tennis, Badminton and Combat Race are being completed for during the one week sporting activities. For an unbiased officiating, it was further learnt that referees were selected from major professional sporting activities in Lagos.
Shortly after the game was flagged off, the “Touch of Flame” was lit by the GOC and all the participating formations and units matched past in their various colourful track suits. Oath of allegiance was also administered on both the participating teams and officials.
Present at the occasion were the representatives of the Air Officer Commanding, Logistics Command, Ikeja, the Lagos State Commissioner of Police, Commandant, Nigerian Armed Forces Resettlement Centre, Oshodi and the Commandant Lagos State Nigerian Security and Civil Defence Corps, Mr Tajudeem Balogun and other senior officers from the military.
Share this on WhatsApp 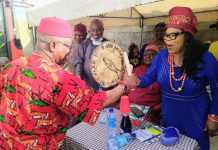 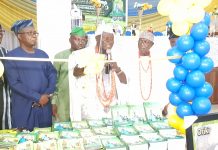 Editor -
Even APC diehards are feeling disgusted the ruling party and its caretaker committee welcome Femi Fani Kayode to the party he spent over six...