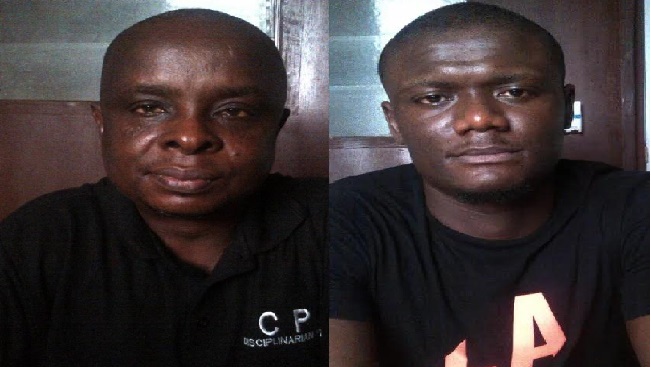 It was end of the road for a commercial tricycle rider based in Owerri and a newly wed Abuja based trader as they have been arrested by operatives of the National Drug Law Enforcement Agency (NDLEA) at the Murtala Mohammed International Airport (MMIA) Lagos.

National Daily learnt that the suspects were held in respect of an unlawful importation of 6.390kg of substances that tested positive for heroin.

It was gathered that one of the suspected traffickers was caught on arrival from Kigali, Rwanda while the other was nabbed on arrival from Nairobi, Kenya and the drug was valued N575 million and was said to have been carefully hidden in their luggage.
According to the NDLEA Commander at the Lagos airport, Ahmadu Garba, gave the names of the suspects as Egwin Cajetan Chinedu, 32, who was caught with 3.900kg of heroin and King Sunday, 38, found in possession of 2.490kg of heroin.

Ahmadu, further disclosed that “Egwin arrived from Kigali on Rwand Airline flight while King Sunday imported the drug found on him from Nairobi during inward screening of passengers on an Ethiopian Airline flight.”

National Daily, however, learnt that preliminary investigation by the Agency indicated that drug trafficking cartels are gradually changing their mode of operation by turning to African countries in sourcing narcotic drugs like heroin.

Confessing to the offence, Egwin Cajetan Chinedu, a bachelor said he needed money to repair his commercial tricycle while King Sunday who left his wife after four days of marriage on the guise of a business trip said that he needed money for his honeymoon and business.
Cajetan, further stated that he needed money to change the engine of his tricycle. “The engine of my tricycle which is my only source of livelihood is bad. While I was looking for money to fix it, I was introduced to the man that promised to pay me the sum of N400,000 on the condition that I will bring his drug from Kigali. I accepted the offer because nobody was willing to help me.

The class two Junior Secondary school dropout added that apart from the repairs, his house rent was due and his landlord had been asking for his money.

“My thinking was that I could smuggle the drug from Nairobi in two days without my wife knowing that I travelled out of the country. All my life, I have been upright in my transactions but this is a huge mistake and I regret my action” King stated.
The Chairman/Chief Executive of the NDLEA, Col Muhammad Abdallah (rtd), expressed satisfaction with the arrest stressing that drug traffickers are now turning to African countries to smuggle heroin that is produced in Afghanistan, Pakistan, India, Thailand and other far away countries.

“The Agency successfully foiled their plan with the arrest and seizure of the drugs. Drug cartels thought it would be easy to smuggle the drugs into the country since heroin is not produced in Africa but I am happy that we are thinking far ahead of them. The Agency will continue to maintain this lead until they are completely dislodged” Abdallah stated.
National Daily further gathered that the suspects will be arraigned in court soon.

HEROIN: WHAT IS IT?

Heroin is a highly addictive, illegal drug. It is used by millions of addicts around the world who are unable to overcome the urge to continue taking this drug every day of their lives—knowing that if they stop, they will face the horror of withdrawal.

Heroin (like opium and morphine) is made from the resin of poppy plants. Milky, sap-like opium is first removed from the pod of the poppy flower. This opium is refined to make morphine, then further refined into different forms of heroin.

Most heroin is injected, creating additional risks for the user, who faces the danger of AIDS or other infection on top of the pain of addiction.

THE ORIGINS OF HEROIN

Heroin was first manufactured in 1898 by the Bayer pharmaceutical company of Germany and marketed as a treatment for tuberculosis as well as a remedy for morphine addiction.

During the 1850s, opium addiction was a major problem in the United States. The “solution” was to provide opium addicts with a less potent and supposedly “non-addictive” substitute—morphine. Morphine addiction soon became a bigger problem than opium addiction.

As with opium, the morphine problem was solved by another “non-addictive” substitute—heroin, which proved to be even more addictive than morphine. With the heroin problem came yet another “non-addictive” substitute—the drug now known as methadone. First developed in 1937 by German scientists searching for a surgical painkiller, it was exported to the US and given the trade name “Dolophine” in 1947. Renamed methadone, the drug was soon being widely used as a treatment for heroin addiction. Unfortunately, it proved to be even more addictive than heroin.

By the late 1990s, the mortality rate of heroin addicts was estimated to be as high as twenty times greater than the rest of the population.