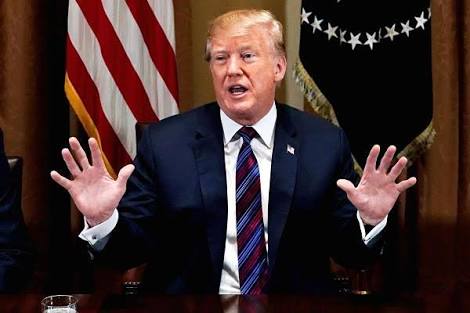 United States President, Donald Trump, has approved the massive arrest of Nigerians and citizens of other countries who are illegally living in the country, beginning from Sunday, July 14, 2019.

The raid will reportedly take place in at least 10 major cities of the U.S.

The New York Times on Thursday quoted sources in the U.S Department of Homeland Security (DHS) as saying the agency will begin a “nationwide raid and arrest of thousands of immigrant family members who are undocumented in the country.”

The DHS officials told the newspaper that the raid will include collateral deportations.

The development is coming barely two months after the US government declared that an estimated 29,723 Nigerians who entered the U.S with either non-immigrant tourism or business (B1/B2) visas between October 1, 2017, and September 30, 2018, overstayed in the country.

According to the ‘The fiscal Year 2018 Entry/Exit Overstay Report’ released by the Trump government, this set of Nigerian immigrants refused to leave the U.S after their visas expired.

The report stated that 195,785 Nigerians who were given visas into the U.S were expected to leave “within the above window.”

Illegal immigrants who restrict their movements may escape the raid as the operatives are legally not allowed to forcibly enter a home.

Those specifically being targeted, according to the report, are those whose deportation have been ordered as a result of their failure to appear in court or who have continued to stay in the country illegally.

President Trump’s directive on the raid is said to be aimed at curbing the rising illegal immigrant overstay in the U.S.
Share this on WhatsApp
Related Topics:DeportationimmigrantsPresident Donald J. Trump
Up Next

I’m not afraid of anyone but God —Oba Akiolu