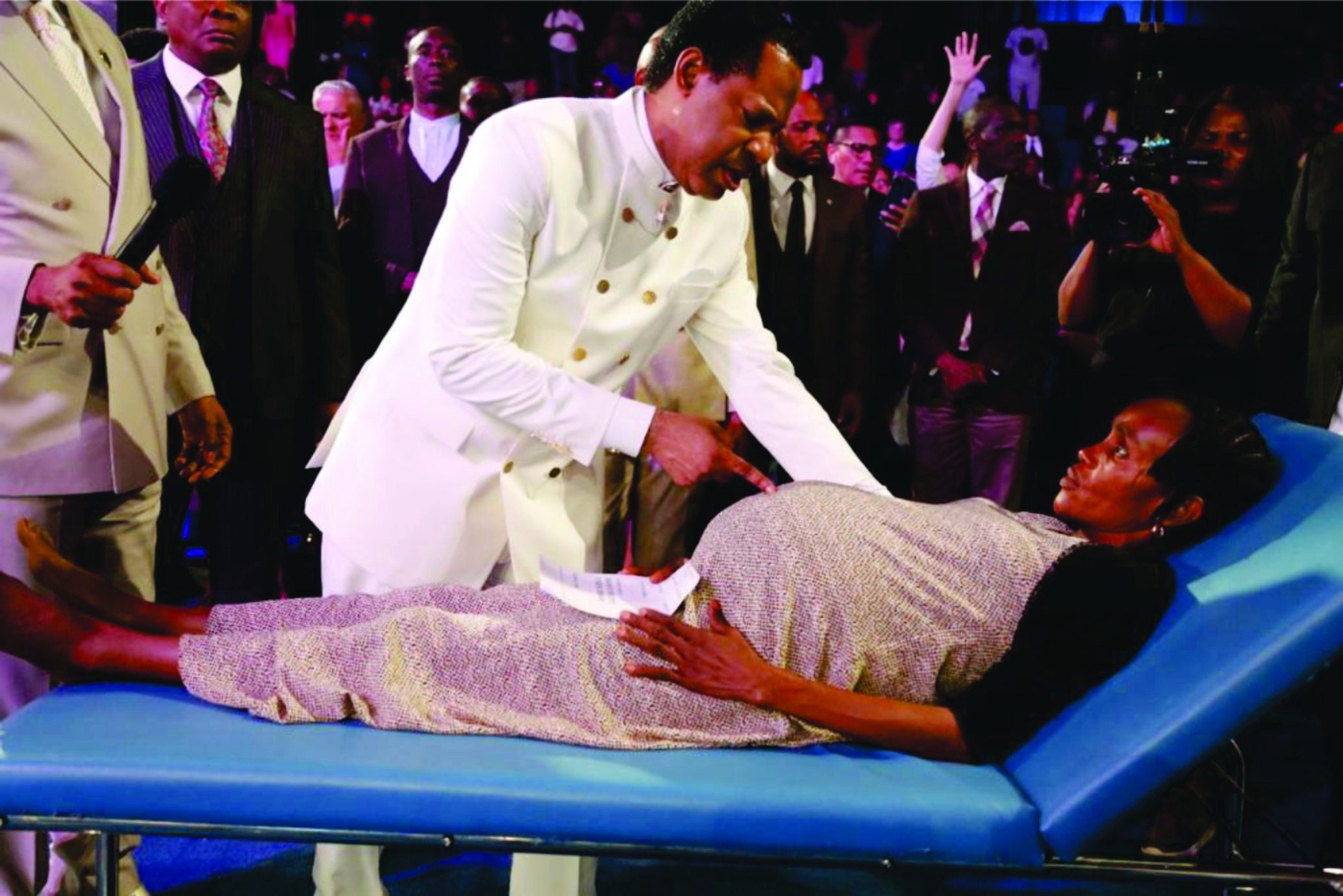 TESTIMONIES and narrations of experiences before encounters with the Healing Streams Live Healing Services with Pastor Chris, illuminate turnaround miracles springing from the spiritual exercise with the President of Loveworld Incorporated. The Healing Streams Live Healing Services has been a stop-gap between hopeless situations in the lives of certain persons and the manifestation of the power of God to turn around situations.

This culminated in testimonies of strange and hopeless situations being reversed during the Healing Streams Live Healing Services, demonstrating the power of the Word of God, and the reality of the Lord Jesus Christ, through the Man of God.

Angelica Trujillo testified of her healing encounter during the Healing Streams Live Healing Services with Pastor Chris after years of tremors, stiffness of body limbs, continuous shaking, limited mobility, and anxiety, which degenerated into worse complications since 2015.

Angelica suffered from Parkinson’s ailment, a brain disorder that led to uncontrollable movements.

According to her, “I could not go back to work. My entire body was stiff and constantly trembling. I had trouble standing and walking and couldn’t even bathe myself.

“I also started to have allergies, breathing difficulties, and blurry eyesight. I needed a wheelchair and a walker to help me move around. I could not concentrate on anything.”

Angelica participated actively at the Live Healing Services.  God remembered her when Pastor Chris was ministering to those connected through video conference, and called out to Angelica.

With hands stretched forth, the Pastor declared her healed and whole. Angelica received the declarations. The next day, she noticed changes in her body; the stiffness and tremors cured; headache, blurred vision, and allergies disappeared; and she received perfect health.

According to her, “I can move around now without losing my balance. All the symptoms I was feeling in my body are gone. I can take showers, do dishes and do everything without pain. I sleep through the night without any sleep medications.”

Also, Prisca Nosike got her health restored after a long period of debilitating illness, as she returned from school with a headache and stomach pain one day.

As the headache became severe, with intensifying pain, medical examinations in the hospital diagnosed Prisca with typhoid and malaria.

Prisca narrated: “They gave me treatments for malaria and typhoid for a month but they were not working.

“My mum reported the situation to the doctors, they referred us to a general hospital. From there, we were referred to several other hospitals. They all diagnosed malaria and typhoid and treated me accordingly, but the drugs didn’t work.”

Prisca was subsequently referred to a teaching hospital, where the result of her blood sample taken abroad for extensive tests, confirmed that she had systemic lupus erythematosus and kidney enlargement.

After six months of therapy, Prisca developed urinary retention, sunburns, joint and muscle stiffness, incontinence, dizziness, irregular temperature, nausea and vomiting, intense fatigue, chronic hair loss, and numbing pains, causing her physical and mental limitations,  including the inability to walk, stand, sit, eat, move her body, or lie down on her side.

Prisca narrated: “When I started the treatment, my hair fell off, I lost my appetite, I couldn’t urinate or pass waste, I couldn’t stand, and I started panting if I walked two steps.

“At one point, my legs became swollen because I had not urinated for over two weeks.”

Prisca’s mother said that “For one year, she needed a blood transfusion every two weeks. She was on a drip (IV treatments) throughout because she could not eat. She took 24 tablets every day.”

After all medications failed, Prisca and her mother were introduced to the July 2022 Healing Streams Live Healing Services with Pastor Chris, there, help came her way from above through the Man of God.

Prisca narrated: “When I came to the Healing Streams, I was very expectant, I knew the end of my suffering was close.

“The Man of God came to me and told me to stand up and look into his eyes, which I did. He blew on me and a wave of electricity went through my body and I knew I was healed.

“The Spirit of God had always been here with me, all I needed was faith to receive. I started thanking God. By the time I got on the bus to leave, the swelling in my legs and stomach had reduced and the pain was gone. That day, I ate what I couldn’t eat before. In less than 30 seconds, I was free. God had done something that one and half years in the hospital couldn’t.”

Prisca from that day stopped using drugs or taking blood transfusion, and she has resumed schooling.

According to Deuel, “After the surgery, I woke up and realized I was still in pain. A day after, my abdomen began to swell, to the point where it seemed it would burst. I needed an operation to drain almost four gallons of fluid from my stomach. In another two days, the swelling started again.”

Deuel had four surgeries in one week without improvement. At a teaching hospital, doctors discovered that his intestines were perforated, and he was diagnosed with abdominal abscesses and gastrointestinal fistulas. He said, “because of the holes in my intestines, I was operated on again, and 50 percent of my intestines were taken out.”

His health deteriorated so much that friends and family went on social media to appeal for financial support to pay medical bills, which provided means for Deuel’s sponsorship to Dubai, United Arab Emirates, for medical treatment.

Deuel narrated: “When I got here, the doctor was shocked that I was still alive. They cut out another portion of my intestines; so, I was left with just 20 percent. I couldn’t walk, eat, or do anything. I knew there was no real chance of going back to a normal life.”

At the limit of medical science, Deuel heard of the July 2022 Healing Streams Live Healing Services with Pastor Chris.

Participating with high expectation in the July 2022 Healing Streams Live Healing Services, Deuel testified: “I knew it was time for God to heal me and the Healing Streams was the channel. I had my faith joined to the faith of people praying for me all over the world, and the prayers were not in vain.

“An outreach team set up a healing center for the program in the hospital ward. I didn’t know much of what was happening but I was looking at the screen. As soon as the Pastor started praying, I removed the pipes from my nose, hands, sides, and everywhere. Then, I stood up and started walking.”

He added: “Before the Healing Streams, every time I tried to eat, my abdomen would swell. That day, I ate six times and I was perfectly fine.

“I had nine specialist doctors who had tried everything but God started from where they stopped.

“Since I left the hospital, I haven’t taken any drugs. I can climb the stairs now. I can stand without help and my hair is growing again. No more pain.”

With a heart of gratitude for  the turnaround in his life,  Deuel declared, “Thank you, Pastor Chris, for your selfless sacrifice. My family and I are grateful. Thank you, partners of the Healing School; because of you, I have seen and experienced love. And I am a testimony today.”

PASTOR CHRIS: A man approved of God by mghty works, wonders and signs