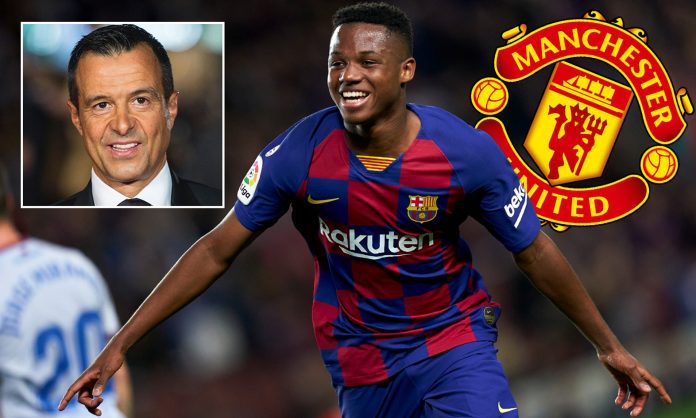 Previous reports suggest that Manchester United are keen on securing the services of Barcelona young sensation Ansu Fati at Old Trafford with Barcelona believed to rebuff any attempt of luring the teenager away from Camp Nou.

Meanwhile, National Daily gathered from recent reports from Mundo Deportivo that Fati has reportedly sever his ties with Lionel Messi by way of appointing Jorge Mendes as his new agent.

National Daily can further confirm that the 17-year-old Fati had been represented by Messi’s brother Rodrigo, but he has now linked up with the super-agent Mendes.

It is a certified knowledge that United enjoy a cordial relationship with Mendes who is also a long-term representative of his compatriot Cristiano Ronaldo.

Manchester United could thus ride on their respectable relationship with the Portuguese super-agent, Mendes whose Gestifute agency is renowned in the game for driving a hard bargain for his players as well as getting involved in several transfer sagas to finally lure the young Fati to Old Trafford.

The Guinea-Bissau born winger who has already picked up two caps for Spain under-21s has just received his first call-up to the Spanish senior team by Luis Enrique National Daily can confirm.