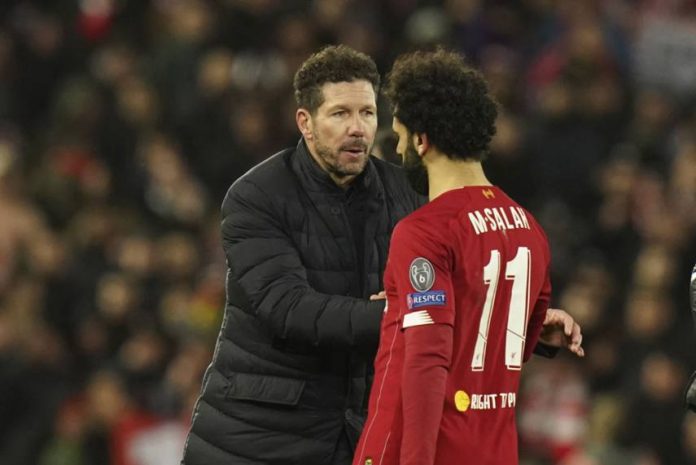 Accolades for Liverpool’s talisman Mohamed Salah have continued to pour in after his sublime form lately.

The 29-year-old has last weekend equaled Didier Drogba’s record as African top scorer in the Premier League when the “Egyptian king” as dubbed by Liverpool fans scored his 104th Premier League in a yet another fashionable style.

Liverpool’s manager has since then regarded his forward as the best player in the world presently and similarly, Manchester United legend Gary Neville and Watford boss Claudio Raneiri have come out to even reecho Klopp’s thought about Salah.

And now, Atletico Madrid boss Diego Simeone whose side Salah and Liverpool will be battling against for the top spot of Group B in the UEFA Champions League encounter on Tuesday night  has come out to describe the Egyptian as “extraordinary”.

Salah has scored in each of his past eight games for Liverpool, including another fine solo effort in the 5-0 Premier League win at Watford on Saturday which has since prompted many to see the former Chelsea forward differently as the current best player in the world.

According to Simeone: “All I care about really is Liverpool but Mohamed Salah is an extraordinary player, who has been playing at a fantastic level for the last few years with Liverpool and his national team”.

“Liverpool are going through a fantastic spell of football, they seem to have a different rhythm, and it is a pleasure to see them play.

“They have no fear to leave spaces at the back. They press high, play a high line, have speed.

“(Virgil) Van Dijk has improved solidity in defence, which is important even for an attacking team like Liverpool, and he brings security they didn’t have last year.

“I don’t expect anything other than a team who will make things very difficult for us.

“We need to match their intensity and then look for our own chances. We will try to find ways to hurt them.

“The last time we faced Liverpool, we won the game at home before we even entered the stadium. I want that to be remembered.”