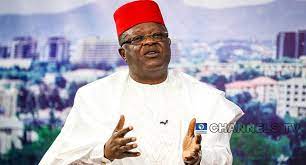 Governor David Umahi of Ebonyi State has cautioned against denying political parties access to government-owned facilities in the ongoing campaign rallies in the state and the nation at large.

He instructed the Ministry of Youth and Sports to grant the Labour Party (LP) the use of the State stadium for its rally, scheduled to hold in January.

The Governor gave the instruction on Thursday in a statement in Abakaliki by Mr Chooks Oko, his Special Assistant on Media.

Umahi gave the instruction while addressing Commissioners and heads of government agencies and departments in his hometown, Uburu, Ohaozara local government area of the state.

According to the Governor, no political party should be denied access to government-owned facilities for any lawful activity, provided they fulfil the demands of the existing Executive order in the State for the use of such facilities.

“The Labour Party has applied that they want to use the stadium on Jan. 11. They must be allowed to use it, but they must comply with the state Executive Order.

“No Party should be denied the use of our facilities, but the laws of the State must be obeyed,” he stated.

The Ebonyi government had earlier placed restrictions on the use of its facilities, including schools and markets, amongst others, for campaign rallies.

The Governor further admonished all political actors to always put the development of the State first in their actions.

He insisted that Ebonyi State would continue to fare better under the APC at all levels.

“I continue to say that our first interest is Ebonyi as a State, and our Party is APC. There is nothing like vote here, and vote elsewhere in all the elections,” Umahi noted.