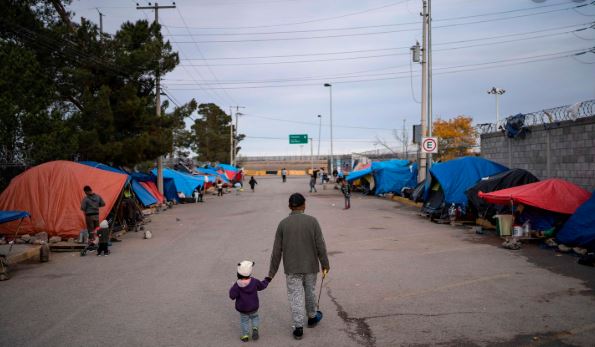 The White House sought this month to embed immigration enforcement agents within the U.S. refugee agency that cares for unaccompanied migrant children, part of a long-standing effort to use information from their parents and relatives to target them for deportation, according to six current and former administration officials.

Though senior officials at the Department of Health and Human Services rejected the attempt, they agreed to allow Immigration and Customs Enforcement agents to collect fingerprints and other biometric information from adults seeking to claim migrant children at government shelters. If those adults are deemed ineligible to take custody of children, ICE could then use their information to target them for arrest and deportation.

The arrangement appears to circumvent laws that restrict the use of the refu­gee program for deportation enforcement; Congress has made clear that it does not want those who come forward as potential sponsors of minors in U.S. custody to be frightened away by possible deportation. But, in the reasoning of senior Trump administration officials, adults denied custody of children lose their status as “potential sponsors” and are fair game for arrest.

The plan has not been announced publicly. It was developed by Stephen Miller, President Trump’s top immigration adviser, who has long argued that HHS’s Office of Refugee Resettlement is being exploited by parents who hire smugglers to bring their children into the United States illegally. The agency manages shelters that care for underage migrants who cross the border without a parent and tries to identify sponsors — typically family members — eligible to take custody of the minors.

Previous Trump administration attempts to give ICE more access to the refu­gee program have generated significant opposition, because it potentially forces migrant parents to choose between reclaiming their children and risking arrest. Administration officials acknowledge the arrangement will instill fear among migrant parents, but they say it will deter families from having their children cross into the United States illegally.

Officials at ICE and HHS said that the information shared with enforcement agents primarily would be used to screen adults for criminal violations and other “red flags,” and that it would not be focused on capturing parents and relatives who come forward to claim what the government calls “unaccompanied alien children.”

Bryan Cox, an ICE spokesman, said his agency will help HHS ensure that children are not placed with sponsors until the sponsors have been thoroughly vetted, a review process that includes using biometric data. Cox said his agency has more-powerful screening tools at its disposal than HHS has, “including better capabilities to identify fraudulent documents or documents obtained by fraud.”

According to those provisions, no federal funds “may be used by the Secretary of Homeland Security to place in detention, remove, refer for a decision whether to initiate removal proceedings, or initiate removal proceedings against a sponsor, potential sponsor, or member of a household of a sponsor or potential sponsor of an unaccompanied alien child.”

HHS officials have generally tried to keep ICE at a distance, insisting that their agency’s mission is to safeguard children and not to facilitate the arrest of their relatives.

Cox defended the legality of the program, citing the technical wording of the law: When a potential sponsor’s application is rejected, “that individual is no longer considered to be a sponsor or potential sponsor,” and the person is therefore open to ICE arrest, he said.

While acknowledging the program could leave children in government custody for longer periods, Cox said better screening “should take precedence over speed of placement to what may ultimately be an unsafe environment for the child.”

ICE officials said their enforcement priority would be adult sponsors with criminal records.

Mark Weber, a spokesman for HHS, which oversees ORR, said in a written response that no ICE personnel are stationed at the agency and that there are “no plans for ICE personnel to be placed at HHS.”

Weber did not address questions about the legality of the new information-sharing agreement with ICE.

Three officials familiar with Miller’s plan said it was part of his broader effort to chip away at congressionally mandated barriers between ICE and the refugee program.

The White House did not respond to requests for comment Friday. One senior administration official who spoke on the condition of anonymity said the Trump administration — which was widely denounced for separating thousands of children from their parents last year under its “zero tolerance” border crackdown — is “in the business of protecting child welfare.”

“Smuggling children into our country is an abomination and horrible for child welfare, and under the system set up under the Obama administration, the level of child smuggling has been atrocious,” the senior administration official said.

By expanding ICE’s role at ORR “we’ll be able to significantly reduce the incentives for child smuggling, and protect thousands — thousands — of children.”

Some officials at U.S. Customs and Border Protection have objected to past information-sharing efforts between ORR and ICE, saying that the practice discourages adult sponsors from reclaiming children in U.S. government custody. When fewer adults come forward, more children must stay in shelters and border stations, and CBP has been faced with caring for infants and young children in austere facilities designed for the short-term detention of adults.

As the migration crisis at the border has abated in recent months, Miller has once again worked to tear down the information wall between the refu­gee agency and ICE, according to those familiar with his efforts.

Miller arranged the new information-sharing plan through discussions with ORR Director Jonathan Hayes, according to two of those officials who, like others, spoke on the condition of anonymity because they fear being fired.

As part of the plan, a senior official at ICE’s Enforcement and Removal Operations unit, Caleb Vitello, was supposed to be temporarily assigned to work inside ORR. But senior HHS officials rejected that part of the plan during a meeting Thursday, two administration officials said. White House officials have privately denounced HHS staff as having “sabotaged” attempts at implementing information-sharing agreements.

Vitello had previously worked with Miller at the White House on assignment to the National Security Council, according to three officials who have worked with both men.

HHS Secretary Alex Azar was not informed of Miller’s effort to place an ICE official at his agency, two officials said.

Azar has worked to keep his agency out of the maelstrom of immigration politics after the “zero tolerance” episode, which separated at least 2,700 children from their parents or other adult relatives until Trump was forced to reverse course.

According to the latest ORR data, the government has approximately 4,300 minors in its care, down from 15,000 a year ago. Children spend an average of 69 days in ORR custody, down from 93 days a year ago but still far longer than in recent years.

Before zero tolerance, minors spent an average of about 50 days in government shelters, even though ORR had responsibility for twice as many children at the time.

HHS also is seeing a growing number of cases they call “category four,” which mean the agency cannot find a parent, relative or other eligible adult to take custody. After several months, those minors are typically placed in long-term foster care. An HHS official said the agency does not have an available tally of the number of category four children.

Arrests on the U.S. side of the border with Mexico have fallen more than 70 percent since May, when 144,116 migrants were taken into custody amid a record influx of families and children from Central America.

The Trump administration has implemented deterrent measures making it significantly more difficult for migrants who cross the border to qualify for U.S. asylum protections. Since the beginning of the year, border officials have sent more than 53,000 migrants back to Mexico to wait outside U.S. territory while their asylum claims are processed.

The government also has started sending asylum seekers to Guatemala under the terms of one of several new agreements that will allow Homeland Security officials to send those seeking refuge in the United States to the same crime-plagued region they are fleeing.

Those measures cannot be used to reject underage migrants who arrive and seek protection in the United States, so administration officials continue to view the ORR program as a “loophole” that allows migrants living illegally in the United States to send for their children to be brought into the country.

The number of unaccompanied minors taken into custody increased 17 percent from October to November, to 3,321, while two other significant demographic categories — family groups and single adults — continued to show declines, the latest enforcement figures show.