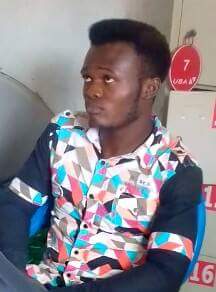 Share this on WhatsApp
Spread the love
A final year student of the University of Calabar (UNICAL), Emmanuel Dominic, has been nabbed by the police for allegedly stealing three hundred thousand (N300, 000) naira from a fruit seller in Calabar.
The 400 level student was arrested by men of the Nigeria Police Force, State Housing Division, Calabar Cross River State after the fruit seller, who preferred not to be mentioned, complained to the police how the boy cowed her to rob her.
The fruit seller said that Dominic has been coming around her business place and patronizes her frequently.
She added that most times the (suspect) usually relaxes with us. It all started with his frequent patronage and friendliness, sometimes he will be in possession of my phone to collect music and movies.
“At times, I do ask him to help me charge my phone in the barbers shop adjacent my fruit shop.
She further narrated that “I saved that money for my school fees and clearance. I have finished school two years ago. I did my project but couldn’t do my clearance which includes my outstanding school fees.
“I had to start this business to be able to raise money to enable me settle the school bills hence I started saving every kobo in my UBA account.
However, National Daily learnt that “Recently, her partner went to the bank to use the ATM to withdraw some money to solve an urgent issue but was surprised that the machine kept telling him insufficient funds”.
Disturbed by insufficient fund feedback, “We went to the bank (UBA Calabar road branch, opposite Port Harcourt Electricity Distribution Company, (PHEDC) for enquiry and discovered that on several occasion, recharge cards ranging from N5000 plus and at times transfer have been done from my account to another using my phone.
It was learnt that the bank instructed her not to panic and scare the person but to think carefully about who could have been responsible for the various transfers.
The complainant added that she was amazed when the bank printed all the transactions and was showed to me, I discovered that Dominic was the one behind it.
ALSO SEE: Police arrest fake doctor who sucks patient’s sperm in Minna
National Daily further gathered that the suspect has been evading her shop. “Some days, he usually pass and would pretend not to notice us. One day, I decided to run after him and held his shirt asking him why he did what he did to me, he denied but because of the drama, people intervened and asked him to clear himself.
“After that, he was compelled to follow us to the bank to prove his innocence. When we eventually got there, it was his phone number that appeared in the many recharge card purchased and his friend’s account number that he transferred my money to,” she explained.
It was further learnt that after the bank updated him with all the details of his illegal transactions, he was said to have owed up and confessed to committing the fraud.
Explaining what he spent the money on, Dominic said he used the money to solve some personal problems.
He was eventually handed over to the police as full investigation has commenced.
Share this on WhatsApp
Related Topics:Emmanuel DominicstealingUniversity of Calabar (UNICAL)
Up Next