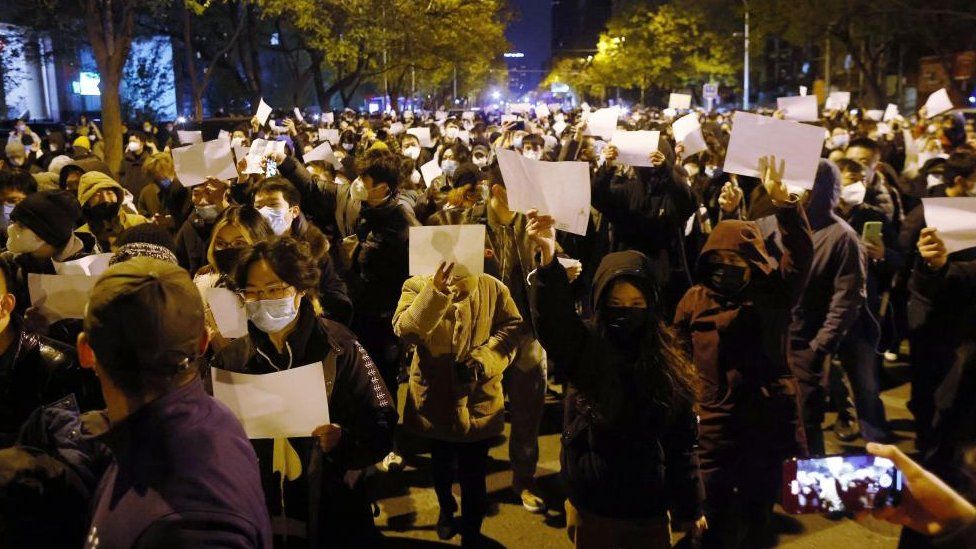 Tensions have been simmering in China for some time now, with swathes of the country fed up with President Xi Jinping’s zero-Covid approach to handling outbreaks of coronavirus.

But these fresh protests were sparked by something more specific – the deaths of 10 people, killed when a block of flats in the city of Urumqi, capital of the western Xinjiang region, caught fire on Thursday.

The incident enraged people online, with many commenting on the fact Urumqi had been under strict COVID restrictions since early August.

According to a resident, people living in the compound had largely been prevented from leaving their homes.

Authorities have now promised to phase out COVID restrictions, but deny that they stopped people escaping the fire.

Protests continued into the night in the capital Beijing and also China’s biggest city, the financial hub Shanghai.

Protests have also taken place during the day in the south-western city of Chengdu and central cities of Xi’an and also Wuhan – where the COVID outbreak originated nearly three years ago.

Videos posted on social media appear to show hundreds of Wuhan residents taking to the streets, with some protesters pictured knocking down barricades and smashing metal gates.

It was during Saturday night’s protest in Shanghai that people were heard openly shouting slogans such as “Xi Jinping, step down” and “Communist party, step down”.

US marks 16 days of activism against GBV