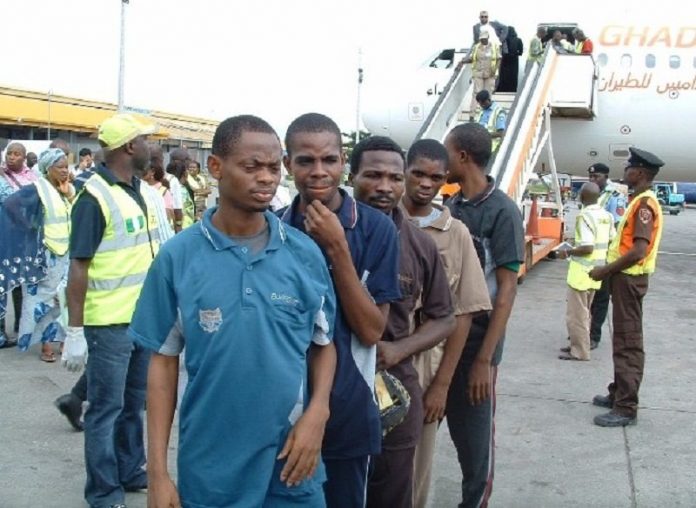 Over two thousands Nigerians have been deported in the last three months from various European and African countries, National Daily investigations have shown.

The latest of these series is another batch of 28 Nigerians who arrived Nigeria on Thursday, June 29 from the United Kingdom.

National Daily gathered that these latest deportees, comprising about 21 males and seven females were brought back aboard a chartered Titanic Airways aircraft with registration number AWC-761/2.

Recall that Spain also deported about 23 Nigerians two days ago while another batch of 34 were jointly deported by Switzerland, Germany, Iceland, Austria, Belgium and Hungary.

UK is topping the list of 10 European countries with highest deportation of Nigerians this year, having expelled 124 in four batches. The UK government have expelled 41 in February, 23 in March, 35 in May and the latest 28 on June 29th.

Italy came second with 110 Nigerians expelled in batches. The Italian authorities have expelled 33 Nigerians in February 23, 37 in March 8 and 40 in April 4.

In April 6 alone, Switzerland expelled 8; Luxembourg and Hungary 6 each; Spain 5; and Sweden 4.

Neighbouring Cameroon is leading African countries with the highest deportation figures of Nigerians in the last two months. The Francophone nation has repatriated 517 Nigerians in one fell swoop in February 23.

It was followed by a conflict-ridden Libya which deported 171 in February 21 and another 258 in May, bringing the total to 429.

South Africa deported 97 in February 28 and another 90 in May after the widespread xenophobic attacks of other African nationals in the country. Mali also joined the league of African nations deporting Nigerians having expelled 41 in February 30.

According to the Senior Special Assistant to the President on Foreign Affairs and Diaspora, Abike-Erewa, Nigeria is concerned by the gale of deportation of its citizens.

Dabiri-Erewa said due to terrorism, migration policies of countries around the world are getting tougher. “The United Kingdom has tightened its immigration policy and is deporting undocumented immigrants. Migrants who have been in England for years without proper documentation are being sent back. 35 were returned to Jamaica two weeks ago,” she said.

“Other European countries like Italy and Germany are doing same. Germany is also planning to send back asylum-seekers, whom they say their request may be rejected since Nigeria is not among war countries,” Dabiri-Erewa said.

There is no doubt that the harsh economic reality in Nigeria has led to ceaseless emigration. However, while some Nigerians travel abroad to engage in productive ventures, a few do so with the motive of engaging in crime so as to make quick money.

The government must make the country more habitable for all Nigerians to stem ceaseless emigration, and its brain-drain corollary.