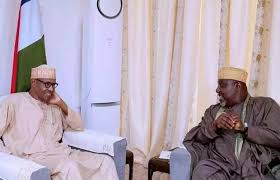 Share this on WhatsApp
Spread the love
President Muhammadu Buhari on Sunday in Daura, Katsina State, met behind closed doors with Governors Rochas Okorocha of Imo and Abdulaziz Yari of Zamfara.
The president’s Personal Assistant on New Media, Bashir Ahmad, confirmed this development on his Twitter handle on Sunday.
He posted: “President Muhammadu Buhari this evening received chairman of the Progressives Governors‘Forum (PGF), Gov. Rochas Okorocha of Imo.’’
Mr Okorocha, who spoke to journalists after the meeting, said that he updated the president on the outcome of the ward congresses conducted by the ruling All Progressives Congress (APC) across the country.
He frowned at the way some members of the party in some states conducted themselves during the exercise, saying the party would check such incidents in future.
Mr Okorocha said: “We expect internal democracy and internal democracy is the way to go. Those kind of funny politics that were played must stop, where people want to carry ballot boxes, steal results looks so primitive.
“I intimated Mr President and we will make sure that such things must stop.’’
On the president’s response, the governor said; “He spoke like the president and he will take the necessary steps to correct this in our party, APC, not just in Imo but across the whole nation, to make sure that there is respect for internal democracy.”
However, Mr Yari, who spoke on the outcome of the ward congresses, said the exercise went well in the North-west region.
He said; “You know in a democracy you cannot expect everything to work 100 per cent.
“But in our region from the information available to us, everything went well in Katsina, Kebbi, Sokoto, Zamfara and Kano, where people expected that there may be a problem, the exercise was successful.
“But anybody that has complain, there is a committee set up by the national executive of the party, they should take their complains there so that they will be attended to.”
There have been mixed reactions  the outcome of the APC ward congresses across the country.
In Delta, the exercise was bloody as the Police Command in the state confirmed that a chairmanship candidate died in the APC ward congresses in Ughelli South Local Government Area (LGA) of the state.
The command’s spokesperson, Andrew Aniamaka, said Jeremiah Oghoveta, was stabbed to death during the exercise at Jeremi Ward 3, Okwagbe.
The ward congresses in Adamawa and Oyo states were conducted on May 6 as against May 5 following political misunderstandings among top APC members and stakeholders in the states.
In Adamawa, mixed reactions characterized the conduct of the ward congresses on Sunday.
While the Secretary to the Government of the Federation (SGF), Boss Mustafa, said the exercise was smooth and hitch free, Nuhu Ribadu said the exercise was not conducted in his Ward of Bako in Yola.
Mr Mustafa participated in the exercise in his Ward at Gwadabawa in Jimeta area of Yola.
A faction of the APC in Kebbi State had staged a peaceful protest to the party Secretariat in Birnin Kebbi against consensus arrangement during the Saturday Congress held across 225 wards in the State.
The protesters were seen carrying placards with different inscriptions like: `Kebbi APC Congress no consensus’; `We need true party Congress not consensus’;`We say no to injustice.’
The leader of the aggrieved members, Adamu Gulma, told journalists at the APC secretariat that ” what happened in Kebbi State is not congress but government and major APC stakeholders hijacked the event to their advantage.”
However, the All Progressives Congress (APC), Ondo State chapter had commended the peaceful conduct of ward congress, held across 203 wards of the state on Saturday.
Abayomi Adesanya, the spokesman of the party in the state said the reports he got from various wards were good.
However, the  ward congresses were successfully conducted in many states of the federation including Lagos, Kaduna, Gombe, Ogun, Nasarawa, Plateau, Taraba, Borno, and Yobe.
Meanwhile, the party had on Sunday called on its members that may have been aggrieved following the conduct of its Saturday ward congress across the country to seek redress in its appeal panel.
Bolaji Abudulahi, the party’s National Publicity Secretary, made the call in a statement in Abuja.
He, however, congratulated all members of the party, saying that the conduct of the congress was generally peaceful.
Share this on WhatsApp