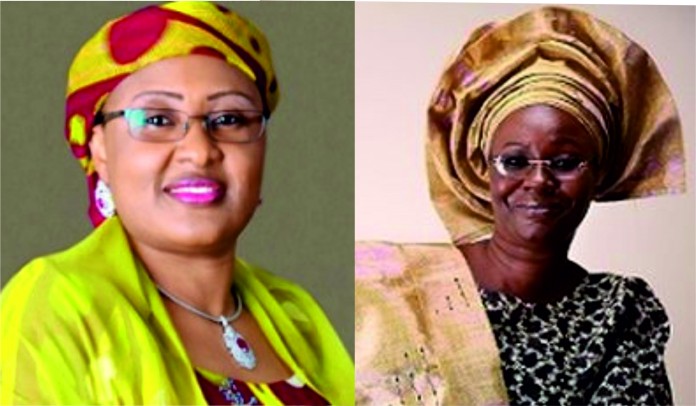 Both Aisha Buhari and Feyisetan Fayose have been living their public lives as first ladies behind religious veils until yesterday when the First lady threw off her hijab, and bared the full length of her tongue to Gov. Ayo Fayose.

The Ekiti governor had said Aisha wired $170,000 to William Jefferson in the Halliburton sleaze that got the American politician clamped in prison for a jail term by a U.S. court.

The Ekiti first lady has yet to lash back at the president’s wife. As a devout Christian in a Pentecostal church known for resisting no evil, Mrs Fayose may not engage Aisha in a brickbat.

And what’s there for her to say when her husband is a loose cannon that keeps blundering. The Aisha Buhari in the Halliburton scandal is not the first lady, according to EFCC ex-chairman Ibrahim Lamorde who was part of the investigation then.

“I was the director of operations at the EFCC at the time so I know about the case very well. I can tell you that it is not her (President Buhari’s wife),” Lamorde told Premium Times.

Apparently, Mrs Fayose, a clairvoyant,  knows better than her husband who can’t see beyond his nose. She had told the governor before the March 28, 2015 election that whether he and the PDP liked it or not, Buhari was going to beat his rival former President Goodluck Jonathan.

That wasn’t the first time the woman was going to prophesy. She actually told her husband the Ekiti 2014 election was his for keeps—either by hook or by crook.

Also in Fayose’s first coming in 2003, the she predicted her husband would be frozen out of office. And it came to pass. She might have as well seen where the wind will blow in the wrong foght her husband is picking around.

Although he has settled in as governor as predicted, Fayose is having a hard time concentrating as he has become the loudest critic of President Muhammadu Buhari.

He took his opposition a tad too far recently when he wrote a letter to the Chinese government asking them to back down on a $2 billion loan agreement with Nigeria. The loan was meant to bankroll a railway project.

Many Nigerians, including lawyers and even PDP members, condemned the move. They said the governor was becoming a national security risk.

What’s driving Fayose rabid now is the latest discovery by the EFCC: the governor had banked up in his personal account some of the $2.1 billion arms vote squandered by ex-NSA Sambo Dasuki in the run-up to the Ekiti 2014 election the PDP won.

The commission has since blocked Fayose’s Zenith account—and those of his associates, including former Minister Musliu Obanikoro currently hibernating in the U.S.

This is in spite of the immunity Fayose enjoys as a sitting governor,

Lere Olayinka, media aide to the governor, has, however, denied this. “The reality is that they are afraid of Governor Fayose and they can’t just help being afraid because their government is evil and Fayose won’t stop exposing them,” said Olayinka, who had been circulating the Aisha rap sheet.