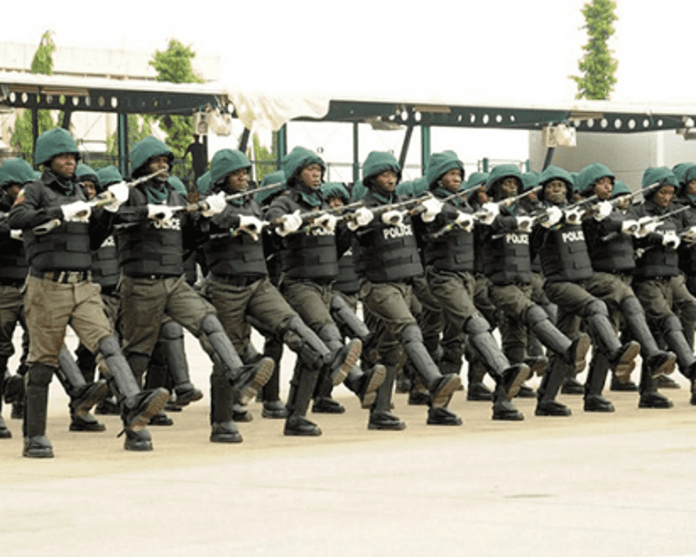 The National Assembly has been charged to rapidly rediscover their parliamentary independence, political will and will to serve Nigeria,  and amend relevant sections of the extant constitution to make room for comprehensive police reforms including the creation of state police.

The Prominent Civil Rights Campaign Body:-  HUMAN RIGHTS WRITERS ASSOCIATION OF NIGERIA  (HURIWA) Said unless the  police as its currently constituted is unbundled and professionalized to legally enforce federal character principles in its top hierarchy rather than the skewed status which favours Moslem North, youngsters from some Southern region of Nigeria would not want to be enlisted into the current Nigeria Police Force.

HURIWA also told the hierarchy of the Nigeria Police Force to embark on thoroughly in-house cleansing to weed out the bad eggs amongst the police force that are usually posted to Southern States to set up Cash extortion rackets as checkpoints and to weed out evil forces within the police serving in some Southern States such as the South East of Nigeria who use extra legal executions of suspects as modus operandi.  HURIWA said so long as these professional misconduct and criminality are tolerated at the highest levels of the present day Nigeria Police Force,  there won’t be lot of useful youths in the South who will be willing and available for enlistment into the Nigeria Police Force.

“We think the current President has unleash significant verbal harm and made toxic opinion which dangerously imperils the institutional image of the Nigeria police force by making public comments rejecting state police which goes to show that northrrn moslem section of Nigeria is comfortable with the skewed leadership structure of the Nigeria Police Which favours the North.”

“We think that president Buhari’s opposition to any sort of police reforms is one of the fundamental factors which have made a lot of Southerners not to come forward for enlistment into the police force since the status quo means that only police operatives from the Moslem North will get to the peak of their career whereas Southern Christians are alienated and frustrated out in their prime”.

HURIWA also demanded the reformation of the near -moribund and hijacked Police Service Commission to ensure that they discharge their mandates optimally and desists from the current modus operandi of incessantly indulging in skewed promotions of Police personnel which substantially graphically signposts to most Southerners that the police is not Nigeria but a Northern Police Force or better still an Hausa/Fulani Police.

HURIWA has therefore counselled the IGP of Police to make commitments to Nigerianise the Nigeria Police Force so that competent and qualified Southerners who have the passion for law enforcement career can be free to enlist into the Nigeria Police even as the lasting solution to Nigeria’s Policing nightmares is the setting up of functional State police to operate side by side with a very lean National police as the Americans have with Federal Bureau of Investigation and the various State policing institutions such as the New York Police.

In a statement on Wednesday, Mba said the extension became necessary “to ensure equal opportunity and even spread of applications, particularly from states in the South-East, South-South geopolitical zones and Lagos State.”

HURIWA said the Police Spokesman said the extension would enable the southern states to meet up with the required quota for their respective states.

MBA added that only 261 were from Lagos State, adding that Anambra has the least figure of just 158 applicants.

Consequently, the Force appealed to states, local governments, religious bodies and other interest groups in the South-South, South-East and Lagos State to mobilize and encourage their citizens and wards to seek a career path in the Nigeria Police Force.

“Interested applicants are urged to log on to the NPF recruitment portal to register before the expiration of the new deadline,” he said, adding that the recruitment exercise is absolutely free of charge.