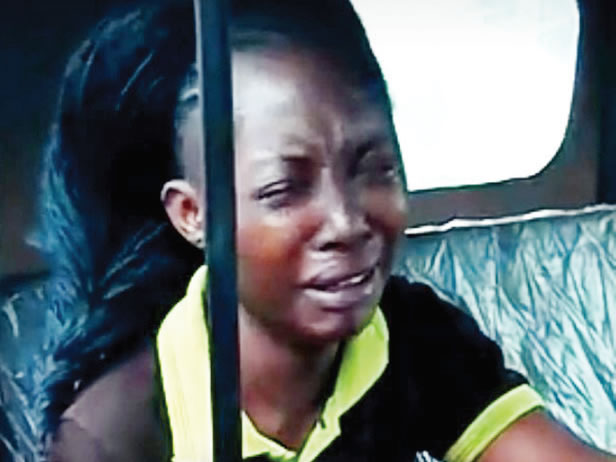 A female teacher in the Ikorodu area of Lagos has been arrested for stabbing her husband to death.

Abimbola Olamide and her husband Dare had an argument that spiralled into fisticuffs, and ultimately the death of the 28-year-old father of two.

In a viral video clip of her confession Thursday, Olamide said she acted in self defence.

According to her, she could not have killed her husband intentionally. But because he was beating her, breaking plates on her head, and she had to do something.

“He had battered me many times in the past, but whenever he beat me, I usually run out of the house,” she said in Yoruba.

“But this time around, he locked the door to prevent me from escaping, pinned me down and battered me. I was helpless.

“I picked up a knife on the ground; my intention was to use the knife to scare him away. So, I held on to the knife, but he didn’t leave me alone. I mistakenly stabbed him; I couldn’t have killed my husband intentionally.

She said her family had warned her to separate from him, but she could not do that because he was the father of her two children.

Reacting, some viewers said she would face the consequences of her action, and others believe she truly acted in self defence.

The case was reported to the police at the Igbogbo station from where the suspect was transferred to the Homicide Unit of the State Criminal Investigation and Intelligence Department, Yaba.

Confirming the incident, Police Public Relations Officer SP Chike Oti said it was another case of spousal killing in which the suspect stabbed her husband in the neck and the man bled to death.

The corpse has been recovered for autopsy, and the suspect taken in for further investigation.