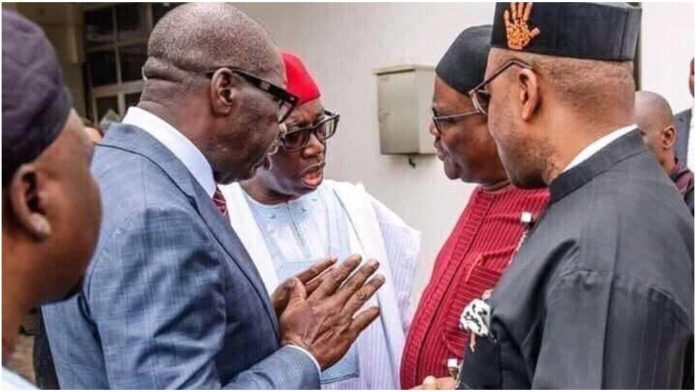 With conflicting ex-parte orders, within four days, suspending and reinstating PDP’s national chairman Uche Secondus, the most powerful bloc within the opposition party has taken side.

“When a High Court in Port Harcourt restrained Secondus from parading himself as national chairman of the party, we advised ourselves that was the way to go. We must comply with that court order,” Tambuwal told newsmen in Abuja after their emergency meeting.

But the order didn’t just suspend the chairman. The court went further.

Tambuwal also expressed the governors’ support for the acting National Chairman of the party, Yemi Akinwonmi, whom the NWC appointed after the suspension.

“We had Akinwonmi presiding over the meeting of the National Working Committee today and he came to brief us on their decision which is in line with the previous meeting of the Governors Forum and the meeting of stakeholders that there should be NEC meeting on Saturday, where we shall be discussing issues about the national convention by the grace of God, which is still holding in October.”

The suspension of Secondus split the party down the middle, and two national deputies, from the north and the south, laid claim to a faction.

Many even believe the governors are divided, considering the power that muscled Secondus out is within the caucus: Rivers GovNyesom Wike.That Tambuwal insisted Secondus must go will not surprise many. Wike and the Sokoto governor are close allies, a likely pair for the 2023 primary.

He admitted the road (to 2023) can be bumpy but the most important thing is that “we are still holding together strongly and that is what we assure our members and teeming supporters across the country.”

The PDP is disintegrating, yet its handlers have been screaming Nigerians need them.

“We earned that confidence and trust of Nigerians and we are not going to betray it,” the governor said.