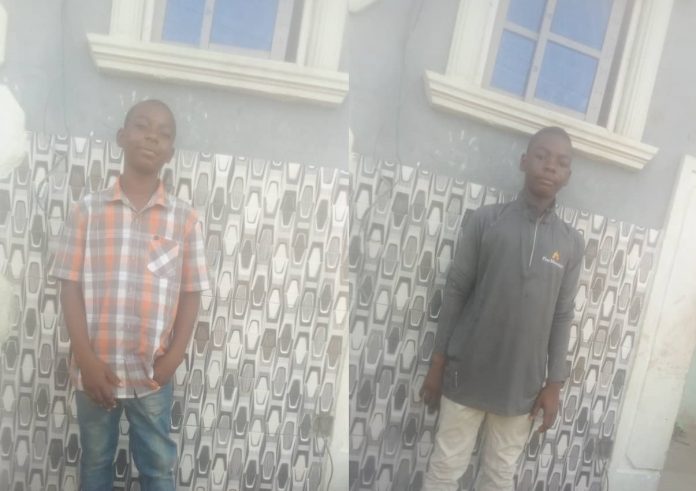 Police officers from the Sango Otta Police Station and officials of the Ogun state Directorate for Citizens’ Rights penultimate Friday rescued two siblings, Toriola Opeyemi Samuel and Toriola Dolapo Micheal from one Mrs. Victoria Adeboye after several reports that she had been maltreating the two boys placed in her care by their father.

It was alleged that Mrs. Adeboye who lived at 10A Akinola close, Ewupe area of Sango Otta, was in the habit of locking the boys, aged 14 and 12 years respectively, outside the house without food and beating them, and also refused to take them to school which their father had enrolled them.

According to investigation, the boys’ father, Mr. Toriola, who lived at same address before relocating abroad, had left them in her care being a relation, so that the children could complete their studies in Lagos.

Further investigation also revealed that the children’s mother is based in Abeokuta, and to avoid disrupting their education, it was advised the children stay with their maternal aunt, Mrs. Adeboye.

When the area was visited on Saturday, it was learnt that Mrs. Adeboye had earlier been apprehended when concerned neighbours reported her at the Police Station, but she was released after about two hours and she reportedly boasted that nothing could be done to her.

A closed neighbor of the accused, Jimoh Arowolo, who narrated the ordeal of the children, stated that when not much changed after reporting her at the police station, a petition was written to the Ogun State Office of the Public Defender and a Facebook post was made about the alleged maltreatment of the children.

Arowolo noted that everyone in the neighbourhood knew about the maltreatment of the child but no one could challenge her due to her troublesome nature.

The Director of Public Affairs, Ogun State Ministry of Justice, Biola Ogunjimi, confirmed the rescue of the children and the arrest of the devilish guardian, adding that the child had been put in protective custody.

“The child was rescued by the Directorate of Citizens’ Right and he’s already in protective custody and the woman has been arrested and detained at the Sango Otta Police Station and she will be arraigned very soon.

The state Police Public Relations Officer, Abimbola Oyeyemi, who confirmed the arrest and the rescue of the children, disclosed that the mother of the victims had been contacted, but she’s yet to show up.

“We learnt from the children that they had been staying with their father until he relocated to the United States of America in 2017. And since their mother is in another state, their father put them in the care of the accused who is their maternal aunt.

“While the matter is still being investigated, we have contacted their mother, and hopefully when she comes, she will be able to throw more light on the matter,” Oyeyemi added.

Further investigation to children school, Dynamic Brave School at Sango Otta, revealed that the two boys have been absent from school for school, and efforts by the school authority to meet with Mrs. Adeboye had been rebuffed.
Share this on WhatsApp