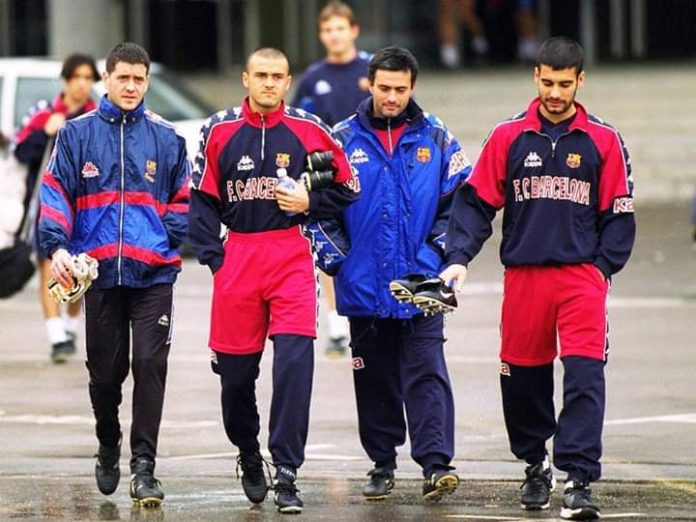 Share this on WhatsApp
Your Circle,
May I introduce the great men in the picture: (From left to right) Ernesto Valverde, Luis Enrique, Jose Mourinho, and Pep Guardiola.
Four boys turned great men. They all had their routes to their destination — greatness. And all of their deeds are peculiar. They are not of the same parents. But one thing unites them. That subject is football.
In many ways, they created their own success story in a way that makes them unique even among the 4.
For instance, among these 4; Luis Enrique is the better footballer. Guardiola is the better manager. Mourinho is the better coach. And Valverde is the better-experienced football expert.
As a footballer, among the 4, Valverde was probably second to only Enrique. He played for more clubs compared to the rest. And he has managed the top three clubs he played for.
What Mourinho couldn’t achieve on the pitch as a midfielder. He pursued as a Coach and became the special one at it.
Of the 4, Mourinho and Pep, both midfielders in their playing days, have better club management success than the other two.  Valverde and Enrique were both forward players.
For club football, Pep has 398 total match appearances and a total of 21 goals. Mourinho played 94 times and got 13 goals. Understandably, the strikers did better in terms of the goals they have to their names. Appearances for Valverde and Enrique respectively are 360 and 427. Enrique scored a total of 107 and Valverde scored 94.
Valverde can dedicate a goal each to Mourinho for all the time the Portuguese played.
What message am I trying to pass? The point is this: “You are unique and are best in your own lane and time”.
We must not envy people. But we must follow a circle of quality value chasers. People going your way, are valuable to you. Go with them.
And even at that there comes a time you must break off and journey alone. There also come a time that it will seem you are competing with people of your circle.
It is what it is.
Compete healthily.
They were at Barca at one point. And they exited Barca at different times. As they chased their future. At some point Pep and Mourinho interviewed for the same job — Barca Coach.
At another point they both battled for the same trophy. Such is life. Be smart, be prepared, be ready.
There will be time you don’t need sentiment. There will be time you play the game to your favor.
Find a quality circle today. If your circle is going nowhere, retract from such a circle. Join a circle that pushes you to succeed. And don’t be too comfortable in that circle.
When the circle had nothing more for him, Pep went to look for that extra elsewhere. Until he found it, out of his place of comfort, out of Spain, out of Barcelona.
For relevance, Enrique dabbled off his circle to a foreign territory. He went to get relevance from a direct rival circle. Life is a game, play it. No permanent enemy, only permanent friends.
It didn’t seem Valverde would ever have a chance to manage the best footballers in the world. He wasn’t considered until the Peps, Enriques were used. But guess what?
His time is now.
He has the job. At times we must all learn the skill of waiting. He didn’t wait making noise, drinking, smoking and getting fat like some people we know in football.
He waited for Barca job coaching Espanyol and Atletico Bilbao. Thats how he waited.  As you wait for JAMB develop your writing skills. As you wait for husband/wife learn cooking, baking or home management.
Wait well.
Currently all four are at the peak of football management. Pep is redefining the EPL. Enrique is rebuilding the Spanish national team. Valverde is redesigning Barca’s playing philosophy. Mourinho is enjoying his sack and for the main time, he is a TV football analyst. Next season he may likely be either the manager of PSG, Juve, Roma or Milan.
Your Footballizing spotter,
Ediale
#ForTheCulture
PS: At this point in the picture; Mourinho was still an apprentice, Pep had no clue he would be bald, Enrique couldn’t have guessed he will need to work with Pep’s blueprint at Barca. And Valverde only had one goal in life — to live and let live.
Share this on WhatsApp