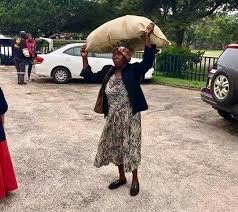 An elderly woman in Zimbabwe who walked over 12kms to deliver aid donations to victims of Cyclone Idai was recognised and offered a lifetime reward. Her uncommon act of love for humanity caught the attention of one of the top billionaires in Forbes list of wealthiest people in the world.

Specifically, the elderly woman identified as Gogo (grandmother) walked from Mbare to deliver her Cyclone Idai donations in Highlands, Harare.

The Zimbabwean billionaire Strive Masiyiwa, Chairman Econet Group, who noticed the priceless act of compassion by the woman whose photo he used on his Facebook post announced he would build her a house at a place of her choice in Zimbabwe.

Masiyiwa is known to be one of the biggest spenders ready to see Africa grow. He has one of the largest support programmes for educating orphans on the continent through his family foundation.

Masiyiwa devotes time to mentoring the next generation of African entrepreneurs on Facebook and his page is one of the most engaging on the platform.

The 58 year-old entrepreneur and businessman is the owner of Econet Wireless and the only billionaire in Zimbabwe. He runs a non-profit organisation, Higherlife foundation together with his wife, Tsitsi Masiyiwa.

He had once joined forces with Africa’s richest man, Aliko Dangote, to tackle the 2014 Ebola in West Africa, raising $35 million to cauterise the epidemic and bolster the economies of affected countries.

He has also supported organisations and causes in the fight against HIV/AIDS, Cervical Cancer, malnutrition and environmental issues across Africa.

The billionaire with huge investments in the telecommunications industry pledged KSh 100,000 ($1,000) monthly allowance for the woman for the rest of her life following her contribution to the victims of the cyclone which rocked several African countries resulting to over 700 deaths. 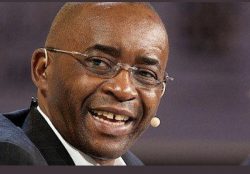 Masiyiwa’s reciprocation to the woman’s good deeds followed an observation by Facebook user Dzokerayi Mu. Mu reminded the tycoon he had used the woman’s photo to highlight how people had come out in large numbers to aid the cyclone victims but forgot to recognise her rare sacrifice.

She had carried the little aid material she had on a sack stacked on her head and walked 12 kilometres from Mbare to Highlands, Harare to deliver the aid because she could not afford KSh 50 bus fare.

In his response to Mu, Masiyiwa said he would return good for good, acknowledging the woman as the face of pure generosity during the season of adversity.

“She gave more than us all. What she did is one of the most remarkable acts of compassion I have ever seen. When this is over, I’m going to find her, and invite her to come and see me, if possible. I will spend time in prayer with her. Then I’ll build her house anywhere she wants in Zimbabwe,” said Masiyiwa.

He stated the house would have solar power and running water, reiterating he admired people who acted in times of crisis. “I will give her a monthly allowance of US dollars 1,000 for life. It is not about how much you have. How many young men, and even women in their cars watched her carry that sack, and never asked to help?” posed the billionaire.