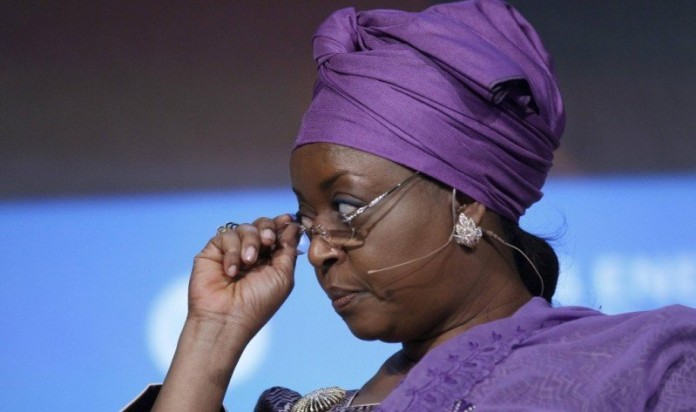 THE former Minister of Petroleum, Diezani Alison-Madueke, may be having a running battle with the Economic and Financial Crimes Commission (EFCC) over allegations of corruption as the Commission continues to dig deeper into purported illicit acquisition of property as well as allegations by the Nigeria Extractive Transparency Initiative (NEITI) of non-remittance of $12.9 billion by the Nigerian National Petroleum Corporation (NNPC) to the Federation Account which spilled into the years she was minister of petroleum.

The former minister is certainly not new to such allegations which were rampant while she was in office during the tenure of former President Goodluck Jonathan but she survived them all. With a different political party now in power she has been facing serious litmus test of several allegations of corruption.

Since the coming of the government of the All Progressives Congress (APC) superintended by President Muhammadu Buhari, there have been high expectations that allegations of impropriety in the oil and gas sector of the economy, essentially, the missing $20 billion allegation in the NNPC by former Governor of the Central Bank of Nigeria (CBN), now, Emir of Kano, Alhaji Abubakar Sanusi II, would have been re-opened for proper investigations and prosecution for recovery of the funds. The expectations seem to be coming into reality when the EFFC stepped into the report of the NEITI Executive Secretary, Waziri Adio, who affirmed before the Senate that about $12.9 billion was not remitted to the Federation Account by the NNPC between 2005 and 2013.

On Adio’s clarification of the NEITI Audit Report before the Senate, the President of the Senate, Dr. Abubakar Bukola Saraki, had promised that the Senate will ensure that all those indicted will be prosecuted.

The revelation of NEITI on the unremitted $12.9 billion to the Federation Account by the NNPC came within the period that EFCC was said to have discovered and confiscated a house in Abuja worth $18 million (about N6.516 billion at current exchange rate in parallel market) purportedly belonging to Dieziani Alison-Madueke.

The EFCC had alleged that the house was bought with stolen public funds and is part of the $10 billion worth of property and cash recovered from corrupt government officials.
A foreign media, Al Jazeera, had reported that the $18 million house contains a bulletproof gym and furnishing worth $2 million. The house was said to be located in Asokoro area of the Federal Capital Territory (FCT), Abuja. The foreign media further displayed in its report jewelries and notes of money purportedly recovered from the confiscated house of the former minister.

Ibrahim Magu, EFCC Chairman, was cited to have declared: “We have been able to take on a lot of big shots that were hitherto untouchable…We have recorded 164 convictions in just one year.”

The house confiscation episode occurred without any prosecution in the court of law to demonstrate the extent to which the EFCC has gone in tracking Dieziani since she left Nigeria for the UK after former President Jonathan and the Peoples Democratic Party (PDP) lost the presidential election to the APC.

However, the former petroleum minister, who has been treating cancer in the UK, has denied the ownership of the said house. Though, there remark that “it was not out of place for the former minister, who had attained great stature in the society and in the industry to afford the reported jewellery,” which was attributed to the woman, but Dieziani’s lawyer dismissed the claimed reaction.

Dieziani’s Principal Legal Counsel, Dr. Chike Amobi had protested: “Anyone who knows or has spent time with our client would readily attest to the fact that she neither thinks nor speaks in that manner.”

There is rising apprehension that the Joint Task set up by the EFCC to implement the 2013 Audit Report by NEITI may engaged the former petroleum minister in another round of battle in their quest to implement the report, though Dieziani was not overtly indicted.

The Director of Communication of NEITI, Orji Ogbonnaya Orji, had in a statement in Abuja, disclosed that the EFCC Chairman had after receiving copies of the reports from the NEITI Executive Secretary, Waziri Adio, constituted a task force whose membership is drawn from NEITI and the EFCC to work out further details of the report for legal actions.

It was indicated that the Task Force is to study the reports and identify areas where financial crimes have been committed against the country.

Magu was gathered to have declared that “it is no longer acceptable for NEITI to publish reports and agencies, companies and individuals that have clearly committed financial crimes as disclosed by the reports are left to go without sanctions.” He had maintained: “I have heard people say that NEITI has no teeth to bite, but today, I assure you that by our renewed joint collaboration, the EFCC will provide NEITI with the required teeth to bite.”

Magu had directed members of the Task Force to carry out the assignment with utmost diligence by developing an action plan and make recommendations for immediate action by the EFCC.

Presenting the report, Adio had insisted that information and data contained in the report were based on facts voluntarily provided and signed up by the covered entities during the audit process. He had maintained that the recent report on oil, gas and solid minerals for the period 2013 highlighted several issues that require full scale investigations by the EFCC.

EFCC source revealed that the Task Force will extend it mandate to the all stakeholders directly involved in the administration of the deals or all those who supervised the oil and gas sector. These, he said, include the former petroleum minister and the various Group Managing Directors (GMD) of the NNPC during the period under review.

The source disclosed that though the indicted business interests have been indicated in the report but that the EFCC Task Force may require such former heads in the petroleum industry like the Petroleum Minister, Dieziani, the GMDs who include Dr. Joseph Thlama Dawha, Engr. Andrew Laah Yakubu, Alhaji Shehu Ladan, Dr. Mohammed Sanusi Barkindo, to provide certain administrative information they may have on the transactions.
Senate’s intervention:

The Senate had, last week, also set up a nine-member ad-hoc committee to probe the N3 trillion either allegedly lost due to systemic failure or diverted by the NNPC as revealed by the NEITI 2013.

Senate President Saraki, in setting up the ad-hoc committee, had remarked that the issues raised by the NEITI boss, cut across a lot of different standing committees, and that in view of that, the general opinion was that an ad hoc committee be set up to probe the report.

He noted that the terms of reference of the committee led by the Chairman, Senate Committee on Petroleum Resources (Downstream), Senator Jibrin Barau, would be to re-examine the financial processes and the fiscal audit report of the NEITI.

The NEITI revelation:
Waziri Adio had, before the Senate on June 15, revealed that NNPC did not remit $12.9 billion (about N3 trillion) to the federation account‎ between 2005 and 2013.

The NEITI Executive Secretary had said that the country only knows the amount of crude oil it exports but cannot say the quantity of the commodity it produces. He explained that the lack of accurate information on the actual quantity of crude oil Nigeria produces was compounded by the absence of a proper metering system. “In 2013, the country produced 800.3 million barrels and out of that, the country made $58.07 billion and that represents an eight per cent reduction on the $62.9 billion that the country made in 2012,” Adio had stated.

Other details of the Report as presented by the NEITI Executive Secretary reveals as follows:
“The second issue is that there are some monies that were withheld, lost or underpaid for different reasons. These monies are in three tranches. The first is in the category of the unremitted, and the unremitted amounted to $3.8 billion and N358 million. The second category is the category of losses, because of some inefficient practices and theft among other things; the country lost $5.9 billion and N20 billion. Under the category of the under-assessed, the country lost $599.8 million.”

‎ “When we look at the unremitted, $1.7 billion is still being owed the federation for OMLS. Also, $1.29 billion from the NLNG dividends and N351 billion from unpaid domestic crude debt, N2.17 billion from cash calls refunds.”

Adio remarked that those are the monies that should have been paid into the Federation Account but were not paid. He went ahead to explain the second category of losses by NNPC and its subsidiaries.

“Out of the $5.9 billion, N4.7 billion was lost to theft and vandalism. N20 billion was lost because the NNPC did not observe the 90 days credit grace and when you look at the time value of money, if you calculate at 12 per cent interest the country lost N20 billion.‎”
Some of the issues in the report: “The first is about the assets divested by NNPC to NPDC. NNPC between 2010 and 2011 divested eight assets that belong to the federation to its upstream subsidiary NPDC. So, NNPC divested 55 per cent of the shares being held on behalf of the federation to the NPDC.”

“These eight OMLS are valued at $1.8 billion by DPR. NPDC paid only $100 million out of the $1.8 billion meaning there is an outstanding of $1.7 billion, and even that $100 million was paid two years after. What this means is that NNPC lifted oil on behalf of NPDC not on behalf the federation despite the fact that NPDC has not fully paid for those assets.”

The Executive Secretary further disclosed that N1.3trillion was posted for petroleum subsidy in 2013 which, he said, was 30 per cent higher than the total for budget education, health, and water and SURE-P.

Senate President Saraki, thereafter, advocated for the prosecution of those responsible for the financial impropriety in the oil and gas sector.

Forensic audit of NNPC under Jonathan administration:
In a previous forensic audit conducted by the audit firm of PriceWaterHouseCoopers on behalf of the Federal Government, during the Jonathan administration, on the operations of the NNPC, the report indicted the management of NNPC for various questionable transactions.
Part of the recommendations include that the Nigerian Petroleum Development Company (NPDC), the upstream subsidy of the NNPC should refund about $1.48 billion to the Federation Account for various unreconciled transactions.

Former President Jonathan had publicly received the report a day after a former Governor of the Central Bank of Nigeria (CBN), Professor Chukwuma Soludo, wrote a long, acerbic article accusing the managers of the Nigerian economy of misappropriating over N30 trillion of public funds, including several billions in oil money.

The forensic audit was commissioned following allegation by the former CBN Governor, Lamido Sanusi, that about $20 billion oil money was missing from the NNPC.

The Presidency had on March 12, 2014, announced, that it had authorised the engagement of reputable international firms to carry out the forensic audit of the accounts of the NNPC.

The allegation that the huge amount had been stolen was raised in 2013 by Sanusi, now, Emir of Kano.

Sanusi had said that as much as $49 billion was diverted by NNPC. Sanusi later reviewed the amount to $20 billion after consultation and cross-checking of records with the former Finance Minister, Ngozi Okonjo-Iweala, and called for investigations after writing former President Jonathan.

Probe by the then Senate into the allegation came out with the conclusion that no money was missing. Sanusi was later fired by Jonathan after he was accused of “financial recklessness”.

The government said no money was missing, but promised a forensic investigation of NNPC.
In April 2014, the Finance Minister, Ngozi Okonjo-Iweala, announced the appointment of the accounting firm, PriceWaterHouseCoopers (PwC), to conduct a detailed investigation into the accounts and activities of NNPC.

The minister said the investigation, under the supervision of the Office of the Auditor-General of the Federation, would take about 16 weeks.