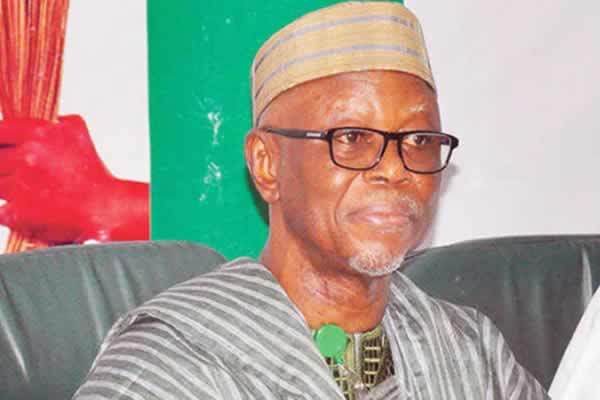 Since the ruling APC formed its government in 2015, the party has been peppered with one problem or the other, including leadership tussle, issues party supremacy, and cash crunch. And the man mostly in the eye the storm is the chairman, John Odigie-Oyegun.
Now a group is stirring up another crisis, bordering on financial mismanagement, and they are asking the party chair to resign—or risk disruption of their coming National Executive Committee meeting.
Save APC and Democracy Youth Vanguard on Monday converge on the party’s national secretariat, demanding audit of the party’s accounts, and asking the chairman to resign.
The group apparently just sprang up as its leader Peter Oyewole couldn’t confirm its popularity in the party.
The group members were carrying placards bearing inscriptions like “Audit APC account now”, “No to non-elective convention”, “APC must support anti-corruption,” among others, getting more agitated as Oyegun arrived the secretariat.
Oyewole alleged that since the APC won the presidential election in 2015, the party’s financial records had not been audited and made public as required by law.
“Since 2015, the ruling party has not held a single meeting. These are enough to remove the National Chairman. We demand the removal of Oyegun now.
“We are also saying ‘enough is enough’ of imposition of candidates at all levels by Oyegun-
led NWC that is currently going on in this party. In any party, where there is imposition, there cannot be fairness, any party where there is imposition, there cannot be equity. The imposition in APC today is just rubbishing the anti-corruption war of President Buhari.
ALSO SEE: SERAP celebrates: As court compels Saraki, Dogara to account for N500bn ‘running cost’
“If Odigie-Oyegun is not removed within the next one month, the APC youth will picket this national secretariat and make it a ‘no go area’ to everybody, staff, the officials and even the security staff will be chased out.”
The party officials didn’t address the protesters . And up till now, its spokesperson Bolaji Abdullahi has not said anything about the protest.
The incident was coming shortly after the APC south-south bloc passed a vote of confidence on Oyegun who has fallen out of favour with many of the party stalwarts in the southwest following his alleged manipulation of the Ondo guber primary last year.
The party national leader Bola Tinubu was miffed by the said manipulation, especially as it affected his candidate Olusehun Abraham who came second after Rotimi Akeredolu.
Tinubu actually called for Oyegun’s resignation then.
Many Nigerians believe that marked the beginning of Oyegun’s crisis.