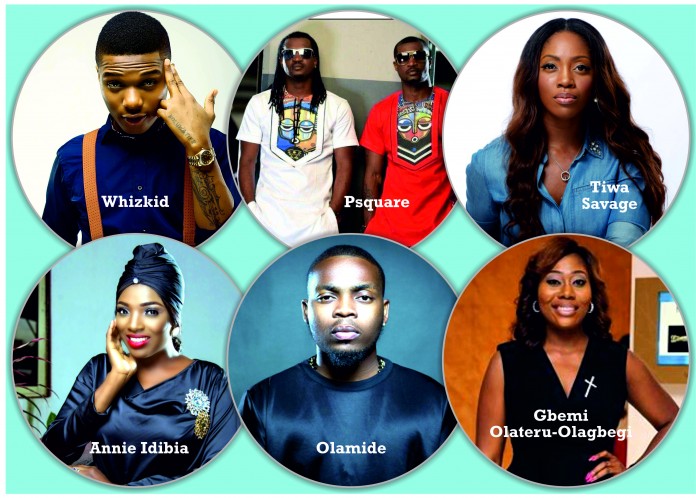 Davido-Sophie
This started out late last year but spanned out into 2016. The music star’s baby mama, Sophia Momodu filed a petition against Davido and his sister Coco for allegedly kidnapping their daughter Imade. There were a lot of accusations flying around social media, including some from Sophia’s uncle Dele Momodu.
Dele Momodu accused Davido of “dehumanizing Sophia Momodu” as a response to the music star’s lengthy post explaining his own side of the drama.
In all, everything is “cool” between the Momodus and the Adelekes since they signed a peace agreement and a settlement was reached. Davido, being the pop star that he is, used the incident as lyrics in songs with Falz and Humblesmith.

Don Jazzy and Olamide
The 2015 Headies took place on January 1st 2016 and with it came another drama. This time it was between two label bosses Olamide and Don Jazzy who were only trying to stand up for their artists.
A lot of people expected YBNL’s Lil Kesh to win the “Next rated Award” but the award went to Mavin artist Reekado Banks. CEO Olamide took the microphone to speak his mind saying the award should have gone to Lil Kesh as he had back to back hit songs all year round. Olamide stated “Ko ni da fun Iya anybody” (A Yoruba expletive involving the mother of the recipient) before storming off with his crew.
Don Jazzy then came on stage to receive the Special Recognition award and in his speech he stated that he has never liked awards and the only reason he came for the show was to support his “children”. He then ended the night with a bombshell saying “Egbon Olamide, if you want the car come and collect it. God bless you”. He and the Mavin artists then stormed out of the venue.
Still steaming from the #Headies2015 show, Olamide “changed” it for Don Jazzy on Twitter, expressing his anger at the turnout of the night. This then gave us some catchy phrases like “Leave trash for LAWMA”, “if you want it, come and collect it”, “Everything was a hit” and “Back-to-back”.
Many celebrities weighed in on the matter such as Wande Coal, DJ Spinall and Charles Novia to mention a few. M.I on the other hand, swerved out of it just before he was about to be roped in. Smooth move!
In the end, everything is cool as they both shared the same photo. One thing though, Who owns the streets now?

Dammy Krane and Wizkid
January was the month of feuds o! Dammy Krane and Wizkid also had their fair share when Dammy angrily poured out his heart out at Wizkid on twitter.
He said he was ready to take on the ‘star boy’ superstar as he’s from the streets, but he had to be begged to calm down. He also claimed Wizkid stole his music several times and is trying to intimidate him.
It didn’t stop there as they also had an altercation at Obafemi Martin’s party at Quilox. The two singers got into a fight and Dammy shared a photo of injuries he sustained during the fight.
2Baba and Obafemi Martins were called on to settle the fight and they eventually announced on social media that everything was fine. It did not end there as some days later, Dammy Krane spoke to HipTV alleging that “everybody knows that Wizkid stole the songs“.

Gbemi Olateru-Olagbegi and the Olumofin brothers
Media girls Toolz and Gbemi of the The Beat 99.9Fm during their handover chat talked about wedding crashers and the lengths they go to get into a wedding. Gbemi also tweeted some of their conclusions on twitter, without mentioning any names. Someone then tweeted at Gbemi asking if one of the people she was talking about was “a quack Psychologist” to which Gbemi responded with a “*cough”
Dokun “Dk” Olumofin, brother of the popular Joro “Dokta Mofin” Olumofin then responded with several profanity-filled Instagram posts. His brother also joined the barrage of insults hurled at Gbemi to which she never responded to any of them.
In the end Joro Olumofin apologized, but too little too late, the damage had been done already.

Wizkid and Linda Ikeji
April brought another round of celebrity feuds, this time between celebrity blogger Linda Ikeji and superstar musician Wizkid.
It started when Linda wrote a story about Wizkid being evicted out of his Lekki house. Wizkid then left comments on her Instagram threatening to beat her up and calling her names. Things escalated when Linda reported Wizkid to the police for threatening to harm her. She said her and the musician met with the Lagos State Commissioner of Police Fatai Ajani Oweseni, after him and his lawyers apologized.
As always, many celebrities weighed in and a lot of memes were created. We are glad that it’s all over though!

PSquare and Jude Okoye
February brought in another celebrity feud, this time, the drama was in the with the Okoye camp. It started when Peter Okoye, in a series of tweets, voiced his anger over how poorly their manager & brother Jude Okoye had been managing PSquare, especially in the past four years. The duo, at that time, were been been managed by their older brother Jude Okoye but it seemed like Peter was done.
Paul and Jude Okoye then responded to Peter’s tweets, with Jude saying “Peter has been going through a lot lately” and Paul taking sides with Jude.
Jude then came out to announce the end of their 10-year managerial contract. Peter also said he had barely managed to remain in PSquare for 4 years. Paul also clarified that Jude was only a scapegoat in the drama as they’ve been having issues for years.
In the end, the duo has separated and moved on to having floating their personal record labels with their artistes releasing new music.

Tiwa Savage and Tee Billz
April ended on a sour note when Tee Billz took to Instagram one rainy morning to pour his heart on the breakdown of his marriage to Singer Tiwa Savage. It was very uncharacteristic of the loving couple and fans and celebrities alike shared their sadness on the issue.
OAP Freeze was one of the first to weigh in before Tiwa Savage came out to address everything in a tell-all interview with Azuka Ogujiuba. One of the phrases she used in her interview “Edible Catering” trended all night on twitter as fans and celebrities reacted to the breakdown of Tiwa & Tee Billz wedding. Ace journalist Reuben Abati, “Area Fada” Charly Boy, Musician 2Baba, Yoruba actor Funsho Adeolu, Media Personality Uti Nwachukwu, OAP Freeze (twice! here & here), Charles Novia and the journalist that did the interview, Azuka Ogujiuba.
Azuka faced a lot of backlash for the interview and had to clarify her role in everything.
Since that time, Tiwa Savage has moved on to big things; new music with Wizkid and signing a deal with Jay Z’s Roc Nation. Not much has been heard about Tee Billz since the drama ensued.

Annie Idibia and Pero Adeniyi’s Sister
This happenened in May when Annie Idibia posted a quote on Instagram about women using their kids against their fathers and gave a shout out to Sunmbo, one of the mothers of 2Baba’s children.
A number of her followers then pointed out that it looked like she was calling out 2Baba’s other baby mama, Pero Adeniyi and Pero’s sister Eniola Titiloye went on Annie Idibia’s page to express her hurt at Annie’s words. She went on to reveal that Annie Idibia was acting out because 2Baba got to see his kids after 2 years of being kept away from them by Annie.
In all, all is well between Pero and Annie as seen in this video posted by 2Baba and Annie.

Seyi Shay and Tiwa Savage
It started when Seyi Shay was interviewed on Channels’ Rubbin’ Minds with Ebuka Obi-Uchendu. One of the most talked about moments from the interview was when Seyi Shay said “I Don’t Know Tiwa Savage Personally”.
Fast forward a few months after, Tiwa was on Urban 96.5 FM and when she was asked how she felt about Seyi Shay being a Pepsi Ambassador with her, she deftly ignored the question and went on to express her delight at Davido’s signing.
Seyi then went on Instagram to express her hurt that Tiwa did not acknowledge her. Meanwhile she had earlier “thrown shade” at Tiwa in an interview on DZRPT TV talking about celebrities who “run off to get married and have babies”.
After facing backlash on social media, she came out to say she was done talking about the interview and how “sarcastic she gets sometimes”

Omawumi and Zinnia
To round out this list we have Omawumi and on-air personality Zinnia a couple of weeks ago.
Omawumi sat down for “Da Chat” with Zinnia, a show on HFtv Africa recently where she opened up about her career and personal life. Omawumi said on the show that her and the host have known each other since 2007.
She was asked tough questions about rumours for example, that she mentioned an offensive rumour that “Omawumi’s daughter was fathered by her manager (not her husband)”, to which the singer responded “eww” and “God forbid”. She said she doesn’t like talking about it, but because it was Zinnia asking, she would be polite.
The interview was going well for about 15 minutes, until the interviewer asked her about an alleged smoking and drinking habit and how it affects her image as a role model, and Omawumi asked the host if she has personally witnessed such, before addressing it then walking off the interview set. It was quite awkward.