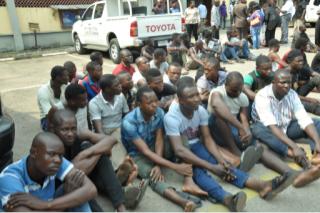 The suspects were paraded by the Lagos boss of police, Mr Fatai Owoseni at the state command in Ikeja.

While parading the suspects, Owoseni said the police efforts at various command in the state paid off which resulted in the arrest of the suspects.

According to CP Owoseni, among those paraded were 37 armed robbers, nine kidnappers and 37 suspected cultists.

He also said the police recovered 28 different brands of vehicles and 20 different arms and 30 live ammunition. During the operations leading to the arrest of the suspects, four suspects lost their lives during exchange of gun fire with the police.