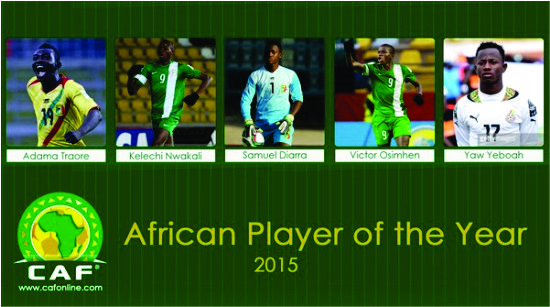 Mixed reactions on Friday trailed the performance of Nigerian players, national teams, coaches and clubs at the 2015 Glo-CAF award ceremony held on Thursday in Abuja.

Some stakeholders who spoke to reporter in Abuja blamed the incessant crises that rocked the football house for the failure of Nigerians to pick major awards at the event.

The Chairman, Senate Committee on Sports, Sen. Obinna Ogba, told reporter that Nigeria must revive its past glory in football because the current development called for a sober reflection.

“It calls for sober reflection; we need to go back to the drawing and find out what is the problem.

“It not just that we didn’t win any award, look at that list of CAF first eleven, Nigerian names are missing there, not even one.

“You only find Nigerian names on the reserve bench; that is if any player is weak or got injury before you talk about the reserve.

“It’s a challenge both to the managers of the game and also to the players.’’

A former Super Eagles’ Captain, Austin Okocha, said that the dwindling performance of the team at international competitions had made difficult for any Nigerian player to be named the “African Player of the Year”

“We have to call a spade a spade; I don’t think any of our players at this moment deserve to be there.

“We have been struggling recently and I think it should be a challenge to us to make sure that next time we should have one of us there.’’

In his own reaction, the 1st Vice President of the Nigeria Football Association (NFA), Seyi Akinwunmi, said the football house was not disappointed with the outcome of the award.

“We are not disappointed rather we are hopeful for the best in future; when you set your target and they come too easy then, it means your target are not high enough.

“The new NFF is doing all it can for the future; there will be a time when all the nominees will be Nigerians and that time will come soon.

“This will be achieved because we are improving the league, doing our youth development programmes, capacity building and also educating people what they need to do.

“It’s not all about talent, it’s about mentality as well; so, these things will come together for good for Nigeria, I am sure that things will change sooner than we think.’’

National Daily reports that Nigerian players, their national teams as well as clubs failed to win major awards at the 2015 Glo-CAF awards.

During the event, with 15 award categories, only two Nigerian players namely Victor Osimhen and Etebo Oghenekaro bagged the Youth Player of the Year and the Most Promising Talent of the Year awards respectively.

Osimhen clarifies his choice of Wolfsburg club in Germany