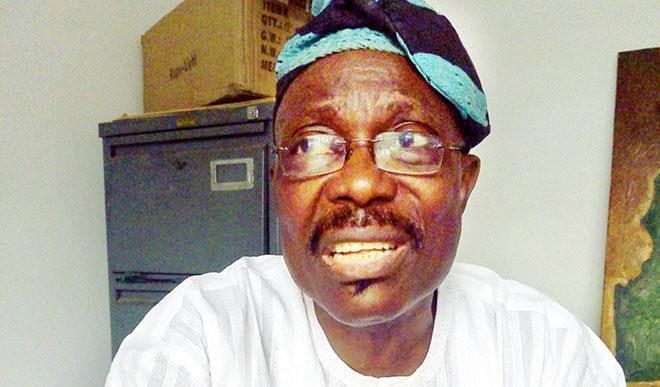 Former Peoples Democratic Party Chairman in Lagos state, Hon. Adegoke Salvador officially decamped to the All Progressive Congress (APC) flanked by major stakeholders from the PDP with a declaration that the state is now a one party state.

Salvador and his allies were received by the State APC chairman, Alhaji Babatunde Balogun in a grand reception held at the Agege Stadium today along with many party chieftains who signaled their delight for his decision.

“I appreciate APC for the reception; I am here to let you know that Lagos state is now a one party state. When you had accumulation of APC and PDP score in the last election, together gives 98.1 percent plus, now that PDP has joined the progressives no other party except APC.

“My goal, aim and target for APC in Lagos State is to have 99 percent in the state, we shall deliver 5million votes for our guber candidate in Lagos. That will be my contribution to support Alhaji Babatunde Balogun. I will ensure APC get 99 percent of votes cast in Lagos in 2019.

“On Osun state election next week end, Lagos state is a pacesetter any state in South west that refuse to follow what we are doing is planning to fail, I counsel everybody in Osun not to be a backbencher, if you want the best dividend of democracy and best living for your people, you must join APC.

“I urge members of PDP to come with their membership cards today so that you can drop it in the bins and take APC membership card right from today”. Salvador averred.

Balogun said, “Today people who are supporters of Salvador decide not to to swim against the tide but along with the tide, in APC.

“We are opening a new page in the political history in Lagos and I am handing over the flag of APC along with state GAC members to Alhaji Adegoke Salvador, all his members are now progressives, all of you have right to register into APC from this moment.

Balogun also indicated the decision of Mr. Segun Sholanke chairman Bikers with Attitude and Determination team to join the APC, as his team indicated their poise by kick starting their power bikes lined on the race track of the field.

Senator Anthony Adefuye member of the GAC in his remarks, noted that defectors from APC are not genuine party men,as real progressives make in route to their party.

“He has made a good decision joining APC,we allowed PDP 16 years,we shall rule for 32years,come next week we will win Osun,many left because they know we will not return them ,so now we have genuine PDP backbone crossing over to APC, Akpabio in Akwa Ibom blaze the trail, he represent PDP, we all know Salvador is the backbone of PDP in Lagos and with his defection, we are doing the wake of PDP in Lagos ,PDP is dead and buried in Lagos state .Adefuye said.