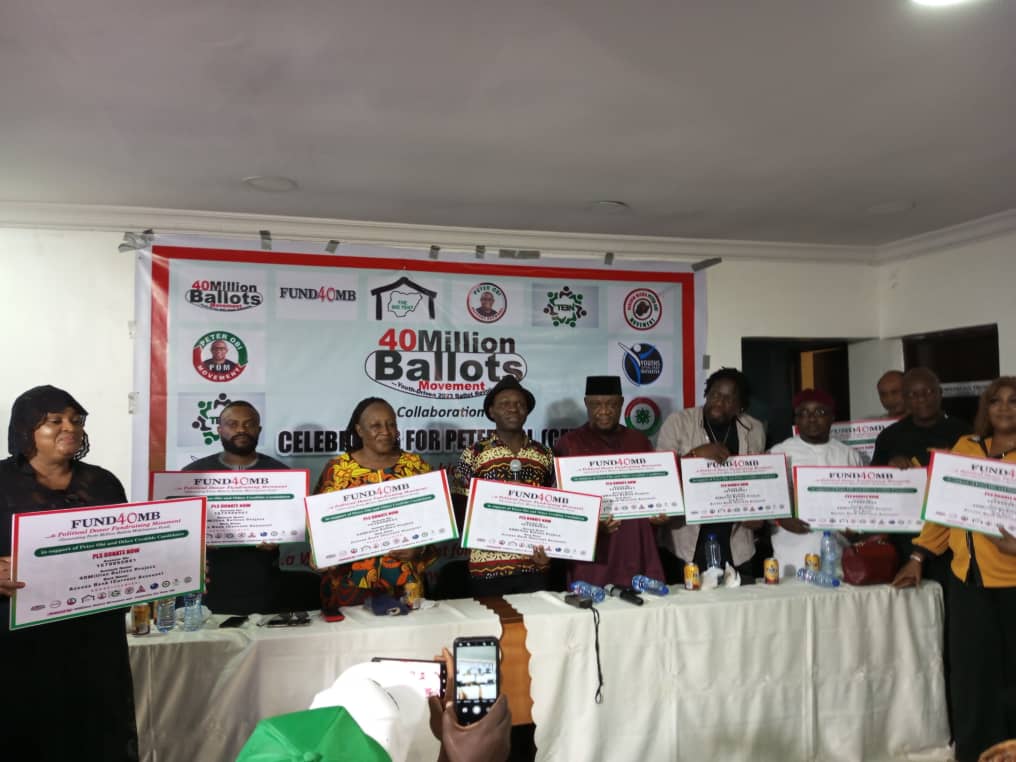 Comrade Kennedy Iyere, Nollywood star, Patience Ozokwor and other top Nigerian celebrities have come together to kick start the Fund40MB donation campaign to help fund the political campaign of the presidential candidate of the Labour Party, Peter Obi and other credible candidates ahead of the 2023 general elections.

The event which was unveiled on Monday in Lagos attracted many celebrities in the Nigerian entertainment sector and various NGOs and CSOs.

Comrade Kennedy Iyere, who is a frontline humanitarian activist and a high-profile social entrepreneur, is the Initiator and Chief Fundraiser of the FUND40MB Donation Campaign.

He said the campaign is being championed globally in collaboration with another pro-Obi support group driven by top Nigerian superstars, known as celebrities for Peter Obi, convened and headed by Patience Ozokwor, popularly known as “MAMA G”.

Iyere also reiterated that apart from the above-outlined Peter Obi Support Groups, several NGOs, CSOs, FBOs, Cooperative Groups and other Social Networks shall likewise benefit from the FUND40MB Donation Campaign because they will derive a share of the funds generated, in order to enable them to address certain existing threats that may hinder the credibility of the electoral processes and outcomes, particularly the risks of human rights violation, electoral violence and vote-rigging among others.

“This fundraising drive will be taken from door to door, neighborhood to neighborhood,  city to city, coast to coast and country to country, until we hit our target or goal,  which is to ensure that sufficient funds are fundraised, generated and mobilized for the support groups of Peter Obi and other credible guber and parliamentary candidates across party lines, as well as for NGOs, CSOs, FBOs and other related groups pragmatically working for Nigeria’s  peaceful and credible democratic transition in 2023”, says Iyere.

Also, Patience Ozowor, popularly known as “MAMA G”, declared that the FUND40MB Donation Campaign will generate sufficient funds to support the “Obedient Movement” in the efforts to enforce the victory of Peter Obi in 2023. Ozokwor appealed to Nigerians and global donors to make sacrificial and generous donations into the account which she displayed to Journalists. “For the sake of our children’s future and posterity, please donate to assist this cause, Peter Obi must be elected Nigeria’s president in 2023, else the country may go into extinction”, declared Ozokwor.

Both Comrade Iyere and Patience Ozokwor had earlier affirmed that among the Presidential Candidates vying for election in 2023, Peter Obi remains the best and only option for Nigeria.

Emmanuel Ijewere, former Chairman of ICAN, who was the Special Guest of Honour at the high-profile event gave a heart-warming goodwill remark.

Loan troubles for African countries as China scale down lending