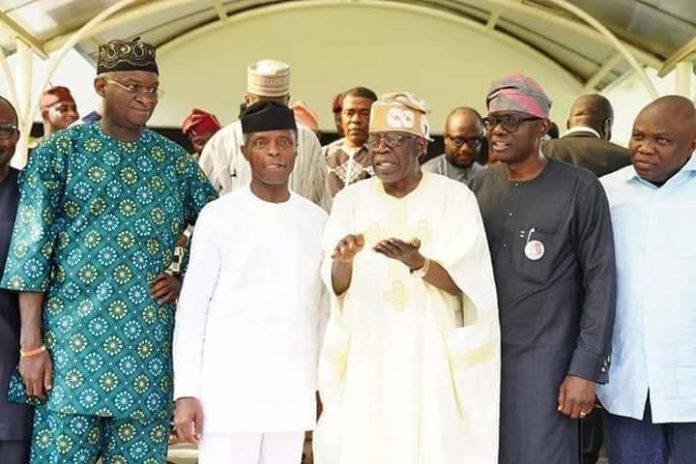 Following his declaration to President Muhammadu Buhari on Monday that he’s up to the 2023 presidential race, Bola Tinubu has made himself clear—with an attitude—to the media probing him.

Among the questions State House correspondents peppered him with was his role as a kingmaker , and the fulfillment they expect him to get doing that. (Many believe the V.P Yemi Osinbajo is his creation)

The APC national leader denied ever wearing the kingmaker cap, and insisted it is a media concoction.

“I’ve never seen the cap of a kingmaker before. That’s the truth,” he said.

“And I’ve never seen where it is written in the rule book anywhere in any country that a kingmaker cannot be a king unless you commit murder.

“So, whatever is your attribute is your own opinion. Me, I want to pursue my ambition without the title of a kingmaker. You can write your literature and your story based upon your own perception”.

On his widening consultation and how long it will take, Tinubu responded slap-bang.

“I’m still consulting. And I have no problem consulting,” he said.

“And I’ve not set a parameter of limitation to the extent of how many people I will consult.”

For the section of the media waiting for a ceremonial declaration, Tinubu said they already heard from what he told President Buhari.

“You’ve gotten that truth from me that I’ve informed Mr President of my ambition, and you don’t expect more answers than that.”

“What did Buhari say?”

“That’s our business,” he said, reeling out how much of a democrat the former military president is.

Even on the forthcoming APC convention—the question of whether it will hold made the interview tighter.

He told the newsmen he is not APC’s spokesman, and Buhari is the party leader.

But he, however, wondered if the party rumbling was puzzling the interviewers.

Tinubu then said, “If that’s added to your own anxiety, or the other party’s anxiety, it is good for us.

“We get it and we’ll get it done properly.”