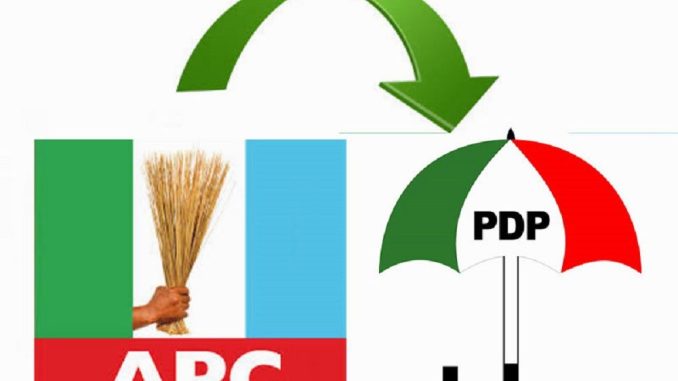 Owing to the indeterminate zoning of the presidency barely 12 months to the 2023 general election, politicians from the North and South of Nigeria are posturing, positioning and simultaneously strategising for the positions of president and vice president.
Mostly involved in this game of juggling of offices are aspirants of the dominant platforms of the ruling All Progressives Congress (APC) and the main opposition Peoples Democratic Party (PDP).
The aspirants engage in the scheming to avoid being caught napping when the zoning pendulum finally rests either in the North or South. So, in the arena is a kind of split-personality switching of positions by already publicised or potential aspirants.
For instance, a Mr A, a Southerner, postures for the president on the assumption that the office will be zoned to the South. Alternately, he’s positioning himself for the post of vice president on the condition that the presidential seat goes to the North. Ditto for the Northerner, who’s angling for either of the positions!
Politicians that ushered in the new democratic administration in Nigeria in 1999 foresighted this scenario, and hashed out a rule-of-the-thumb arrangement that, going forward, the presidency should rotate between the North and South every eight years.
In particular, the previously acclaimed leading political party, the PDP, places emphasis on zoning of elective positions, and has tried to respect the formula in picking its presidential candidate.
Thus, beginning from 1999, Southern Nigeria took the first shot at the presidency, with the post micro-zoned to the South-West, which fielded retired General and former Head of State, Chief Olusegun Obasanjo of the PDP, and former Secretary to the Government of the Federation, Chief Olu Falae of the All Peoples Party (APP).
The micro-zoning of the presidency to the South-West was to placate the region for the denial of the office that’s convincingly and comprehensively won in the June 12, 1993, election by a South-westerner and billionaire business magnate, Chief Moshood Kashimawo Olawale Abiola.
The military regime of Gen. Ibrahim Badamasi Babangida, which ordered the election, annulled it when Chief Abiola was coasting home to victory, as evident from the partially-declared results.
Let’s have a flashback to that election, described as a watershed, and considered by local and international observers as the freest, fairest and most credible in Nigeria’s electoral history till date.
An article by the influential New York Times of June 24, 1993, a day after the poll annulment, stated that, “… although voter turnout was light by past standards, there was no evidence of the violence and vote-rigging that marred the last round of balloting (in 1983), nearly a decade ago. Foreign observers generally described the elections as free and fair.”
Broken only by the four-year government of President Shehu Shagari (1979-1983), the military had had a spell of 23-year rule (1966-1979 and 1983-1993) since the first coup of January 1966.
So, prior to ordering the 1993 poll for two government-established political parties, the Social Democratic Party (SDP) and National Republican Convention (NRC), the regime of self-styled ‘Military President’ Babangida had embarked on a convoluted electoral process to return Nigeria to a democratic system.
The Babangida government had allowed the Prof. Henry Nwosu-headed National Electoral Commission (NEC) the full rein to organise and conduct the election for Chief Abiola of the SDP and Alhaji Bashir Tofa of the NRC.
But in fishing for excuses to annul the franchise, the military not only heaped blames on the NEC for tolerating electoral malpractice, allegation that poll observers dismissed, but also said that on account of the plethora of lawsuits that attended the electoral process, the government had to take steps “to save our judiciary from being ridiculed and politicised locally and internationally.”
In truth, it’s the military clique that engineered series of subterfuges, including sponsoring the notorious Association for a Better Nigeria (ABN), led by maverick billionaire, Senator Arthur Nzeribe, at which behest one Ambibola Davies obtained court injunctions in Abuja, first on June 10, 1993, to stop the election from holding; on June 14, 1993, to stop further announcement of the results, which the NEC obeyed on June 16, 1993, and halted declaration of the results; on June 17, 1993, pro-democracy activists obtained two Lagos high courts’ orders for the NEC to declare the full results; and on June 23, 1993, the Abuja high court, in reaffirming its June 10, 1993, ruling prohibiting the NEC from conducting the election, declared the poll “null and void.”
Taking advantage of the Abuja court pronouncement, the Babangida government cancelled the election on June 23, 1993, and suspended the NEC, whose June 14, 1993, “interim results showed Abiola (and the SDP) leading with an overwhelming majority in 19 states, while Tofa (and the NRC) had a clear majority in 11 states.”
But due to widespread protests against the annulment, the military junta, in the infamous “stepping aside” of Gen. Babangida on August 27, 1993 – the date the National Defence and Security Council (NDSC), empanelled by Babangida on January 5, 1993, to replace the Armed Forces Ruling Council (AFRC), had promised to hand over to a democratic government – installed an Interim National Government (ING) headed by Chief Ernest Shonekan.
The ING lasted only 83 days before Gen. Sani Abacha, left behind as Chief Army Staff/Secretary of Defence by the retreating Gen. Babangida, leveraged on a November 10, 1993, Lagos high court judgment by Justice Dolapo Funlola Akinsanya, voiding the ING as illegal, to oust Shonekan, and declare himself as Head of State.
Besides refusing to honour the June 12 poll, and install Abiola as President of Nigeria, Gen. Abacha, terrorised the country through sponsored assassinations and disappearances of opposition figures, and instituted fresh electoral processes that critics said were primed to enable him transmute into a civilian president.
But Abacha died suddenly on June 8, 1998, and was succeeded by Gen. Abdulsalami Abubakar, then Chief of Defence Staff, on June 9, 1998. Coincidently on July 7, 1998, a month after Abacha’s death, Abiola, who’d audaciously declared himself President in 1994, also died in a mysterious circumstance.
After a further stay in power for six years (1993-1999), the military, under Gen. Abubakar, returned Nigeria to democracy in 1999, handing over power to President-elect, Chief Obasanjo, who kicked off rotation of the presidency between the North and South.