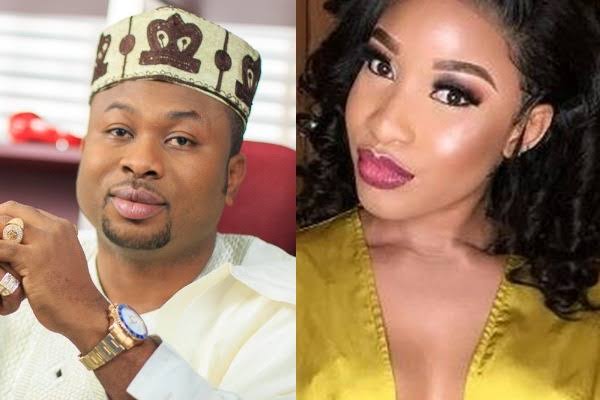 Share this on WhatsApp
Spread the love
Following the lingering marital crisis of between Tonto Dikeh and her ex- husband which has been a consistent topic on different social media platforms, it has been revealed that the actress is sponsoring a particular Instagram account to frame Churchill over the bride price issue.
A fake whatsapp chats disclosed where an amount of 1.7million is been discussed for marriage plans. Though, The ex husband gave 1.7 million and according to inside source she wanted him to add more for the food and drinks to entertain the visitors in her home in Port harcourt during the first introduction visit.
The frame up and blackmail was triggered when veteran Journalist Azuka who conducted Tonto Dikeh’s first interview during her marriage crisis released video evidences which countered all Tonto dikeh’s claims against the ex-husband including domestic violence, infections and other accusations.
Cutie Juls instagram handle sponsored by Tonto Dikeh has vows to revenge Azuka video proofs labelled against the ex- husband.
The account has always rose in defence of the actress even as several of her fans have called her out to go back to acting to get busy instead of looking for what to label the father of her only child -King Andrea Churchill.
In one of her social media outburst, Tonto claimed Azuka collected money from to grant her ex-husband interview but in her similar way of contradicting herself she publicly apologized for accusing her wrongly.
ALSO READ: How Tonto finally killed ex-husband
It could be recalled that in 2016 when the going was good, Tonto Dikeh revealed in an interview, recently posted on instablog how the ex-husband was the man of her dream, who actually drew her closer to God but reverted her words in recent blackmails.
Though, the whatsapp chats on Cutie Juls was expected as Olakunle Churchill sighted such fake chats in his recent response to a fan on instagram as one of the many ways to rubbish him.‎‎
Share this on WhatsApp