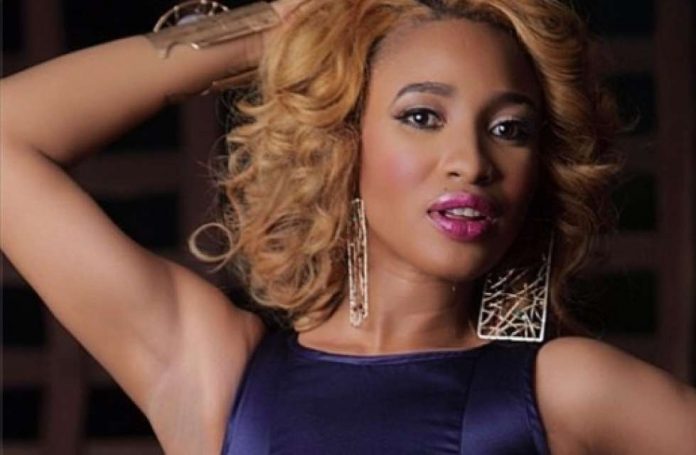 Share this on WhatsApp
Spread the love
Nollywood actress, Tonto Dikeh, has spilled the beans on her relationship with ex-husband, Olakunle Churchill.
The films star has been known to rain insults on the father of her son on social media and she appears to have revealed the reason for her intense dislike for him.
If all she has said in the past never affected Churchill, this final series of attack could finally kill all the pride the man still posseses.
In a revealing video on her YouTube channel, Tonto spoke on Churchill’s diabolical ways, his dealings with internet fraud, his family and how Nigeria’s former president, Obasanjo, is not his father like he claimed.
Tonto explained that Chruchill is into cyber fraud popularly called Yahoo Yahoo. According to her, she found out when she caught him in the middle of red candles with a red cloth tied to his waist with a laptop in his lap.
She said: “Yes! My son’s father is a fraud. He does Yahoo. How I know? Because I caught him in the middle of a red candle with laptop in his lap, with a red pant on, red cloth tied around his waist.”
ALSO READ: Biafra Youth League threatens war (Video)
Tonto Dikeh also called out fans for saying her posts might affect her son in future The actress claimed that Chruchill lied to her during their whole relationship and his family is a lie. She added that the father of her son was never related to Obasanjo by blood and that he was just Obasanjo’s gardener. Tonto said: “The first time I met them, the mother told me she was Obasanjo’s wife, It’s a scam. He told me he is Obasanjo’s son, It’s a scam. He was a Liberian for Obasanjo.
His father was Obasanjo’s gardener who graduated into being a spiritual leader.” The actress was not done as she also spoke on how the house they lived in during their marriage was actually a rented apartment and not his own like he claimed.
Tonto is no doubt a loving and doting mother to her son, King Andre, and she shows him off on social media at any given opportunity. However, the mother of one made the shocking revelation regarding her son in a recent interview. According to the film star, her pregnancy was never something she wanted to keep.
Tonto in a viral video, with Daddy Fresh as the guest interviewer, also narrated why and how Churchill cheated in the relationship.
According to her, the man slept with dirty girls when she was pregnant. She claimed the man did those things because he was suffering from premature ejacuation. That the most he lasts on a woman was 1min.
Share this on WhatsApp