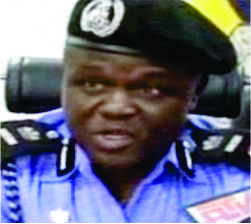 THE Assistant Inspector General of Police (AIG) Zone 2, Onikan, Bala Hassan, has said that the Police must increase their level of intelligence in order to stop criminals from carrying out heinous crimes against the citizens.
Hassan who spoke with our reporter when he visited the scene of last Wednesday’s robbery attack at FESTAC Town in which two commercials banks were involved. He vowed that the Nigerian Police would do everything possible to arrest the criminals with a view to bringing them to justice.
Meanwhile, the Area “E” Commander, Mr Frank Mba has been redeployed with immediate effect. His posting to Osogbo, Osun State came via a signal on the order of the IGP Solomon Arase.
AIG Hassan said, “It is our duty to ensure that the criminals are brought to justice within the shortest possible time. That is the only way the heart of Lagosians will be at peace. We must do our best to stop a repeat of an ugly incident of this nature.”
On equipping the marine police, AIG Hassan said, “You can equip them but it is difficult to cover all the vulnerable areas. Therefore, there is the need for us to be on guard and corporate with other security agencies and members of the public to get information that could stop their operations.
“They must have gone to drinking joint; somebody would have seen them. If you had reported to the Commissioner of Police that you saw some people in suspicious manner drinking and planning robbery operation, they would have been arrested.
“We must increase our level of intelligence to make sure that this thing doesn’t happen again. That the robbers were on military uniform does not mean they were uniform men, the purpose of that could be to create an atmosphere of intimidation so that they will be able to carry out their operation,” he explained.
On police response, the AIG added, “If we had followed the way they (criminals) did, there would have be a lot of causalities because this is a built up area from the bank and the neighbouring community. The important thing now is for the robbers to be arrested and brought to justice,” AIG Hassan reiterated.
He appealed to Nigerians to avail the police of useful and timely information that would help the force to reduce crime to the barest minimum. “Any suspicious person must be reported to the police,” he added.
At the Lagoon that served as entrance and exit point for the robbers, Ajibade, who sells at the market located in the community, told our reporter that the robbers forced them to lie down threatening to kill anyone that disobeys their order. To make sure that no one made any phone contact, they positioned some people to watch over them while others went for the operation. “It was a semi-hell,” he concluded.