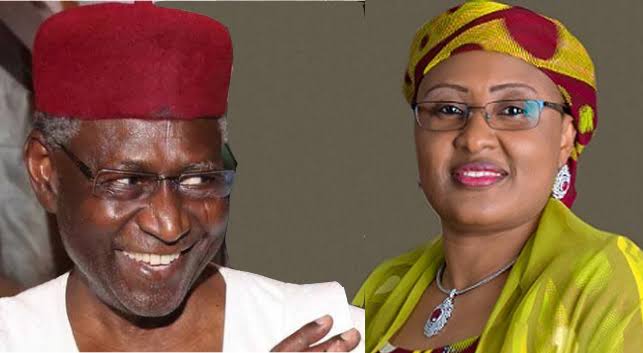 The First Lady of the Federation, Hajia Aisha Buhari, intensified her battle with the perceived cabal in the Presidency, commencing fresh battle with the Chief of Staff to the President, Abba Kyari, for allegedly unilaterally manipulating the ministerial appointments recently made by President Muhammadu Buhari in constituting the Federal Executive Council (FEC) for his second tenure.

National Daily learned that the latest bubble busted over the endorsement of retired Brigadier Buba Marwa, former MILAD in Lagos State, as ministerial nominee from Adamawa State, nu the wife of the President who the Chief of Staff rejected and substituted with another name while allegedly unilaterally compiling the ministerial nomination list which President Buhari was said to treligiously accepted as given without scrutiny or consultation.

It was said that Hajia Aisha Buhari has been highly furious with Abba Kyari for allegedly upturning the nomination of Marwa for ministerial appointment in the new federal cabinet.

Hajia Aisha had during the first tenure of President Buhari raised alarm over a cabal in the Presidency, blasting Abba Kyari of leading the cabal to hijack the Presidency of the country.

Hajia Aisha had made the open revelation in an interview on the Hausa BBC programme. Her husband had then responded that she belongs to the kitchen and the other room, a statement that went viral in the social media.

It was gathered that the First Lady of Nigeria does not see ball to ball with the Chief of Staff to the President over the secretive running of the presidency.