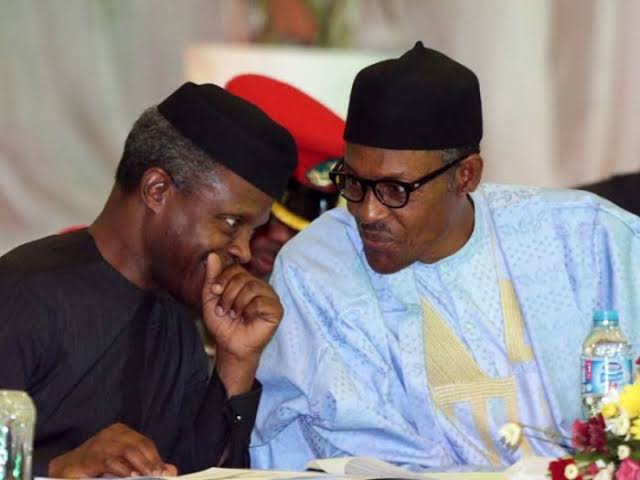 At the inauguration of the Federal Executive Council (FEC) in Abuja last week, President Buhari had acknowledged the achievements the All Progressives Congress (APC) government made under his leadership in the first tenure, and observing the challenges ahead. The president further acquainted the newly appointed ministers of the determination of the APC government to build on the progress of the last four years in order to fundamentally shift Nigeria’s trajectory and improve the wellbeing of the people.
President Buhari, therefore, declared, “Today, I am pleased to inaugurate 43 new Ministers who will work with me and the Vice President in our service to the people of Nigeria. You were chosen from each of the 36 States of the Federation, and most importantly, you share my commitment to working tirelessly for the people of this country and to achieving a future where every Nigerian can reach his/her full potential.”

However, having noted that the ministers will work with him and the vice president, President Buhari created perceived lacuna in the chains of official communications between the ministers and his office, making some stakeholders suspect that the president is relegating the vice president to insignificance. The stakeholders noted that whereas President Buhari acknowledged the importance of vertical and horizontal communications networks in governance, including the communication net among ministers, permanent secretaries DGs and CEOs of federal agencies, the President, either deliberately or by omission, subtly ceded the powers of the Vice President to the Chief of Staff, Abba Kyari, through whom official communications between the ministers and the president’s office would be processed. Apparently, the stakeholders argued that President Buhari by his official directive made CoS Abba Kyari the de facto vice president with executive powers while Prof. Osinbajo remains the de jure vice president but without executive powers.
Moreover, the president also ceded all FEC matters to the Secretary to the Government of the Federation, Boss Mustapha. In any case, the SGF is traditionally the store house of government policies, but assigning all FEC matters to the SGF, again, raises suspicion of grand plot to render the vice president irrelevant in the APC government.
President Buhari had in the context of the above declared: “Let me also emphasize that, as heads of your respective Ministries, and for effective implementation of your mandates, you are required to work closely with the Permanent Secretaries and Chief Executive Officers of Agencies under your purview. This has become necessary considering the fact that, the task of moving the country to the Next Level requires dedication, focus, and collective efforts.
“I must emphasize the importance of communication and harmony within our government. You must work in harmony with your fellow Ministers. “Communication – vertical and horizontal – can only be ignored at a price. As I said yesterday, in terms of coordinating communication, kindly ensure that all submissions for my attention or meeting requests be channeled through the Chief of Staff. While all Federal Executive Council matters be coordinated through the Secretary to the Government of the Federation in order to speed up the process of decision-making.”
These directives, subsequently, generated uproar across the country and precipitated mix-up in the Presidency.
However, the presidency defended the directive of President Muhammadu Buhari on the status Abba Kyari in coordinating the ministers.

The Senior Special Assistant to the President on Media and Publicity, Garba Shehu, in a statement explained that President Buhari merely pronounced one of the primary functions of the Chief of Staff. He maintained that the role has not changed.

Carba Shehu had declared: “Recent media and social media reports on the responsibilities of the Chief of Staff to the President have suggested that the role has changed. This is not the case.

“Today, under the Buhari II administration the role of Chief of Staff remains the same as it was under Buhari I.

“It is worth stressing that the role and responsibilities of the Chief of Staff and the method of communication and arranging scheduling between Cabinet members and the President are, in Nigeria, based on the US model, where the same system operates – and has done for decades – in precisely the same way.

“That role is to act as the head of the presidential administration at Aso Rock; to be an adviser to the President on any and all matters; to be the line manager for all staff at Aso Rock; and to manage appointments and scheduling for the President.

“In the traditional presidential system, it is a primary function of a Chief of Staff, which may vary according to the needs and desires of each President, to supervise key State House Staff, control access to the office and the person of the President, manage communications and information flow and this includes that which binds the relationship with the two other arms of government.

“When President Buhari explained to ministers that they would be expected to communicate with him and arrange scheduling to meet with him primarily via the Chief of Staff, he did so as many of the Buhari II Cabinet ministerial appointments are new appointments and cannot therefore be expected to know how matters of liaising with the President operate.

“This is to stress that access to the President is open to ministers. It is not true that this is denied them in the Second Term.

“The Secretary to the Government of the Federation (SGF) on the other hand is responsible for ensuring the effective coordination and monitoring of the implementation of government policies and programmes. “All cabinet matters must go through him.
“Under this dispensation, a performance evaluation of ministers and Permanent Secretary will be maintained by the SGF. Two weeks after assuming office, they are expected to sign mandate acceptance documents.

“It is time to end the unnecessary controversy, for the key appointees of the President to carry out their jobs.”