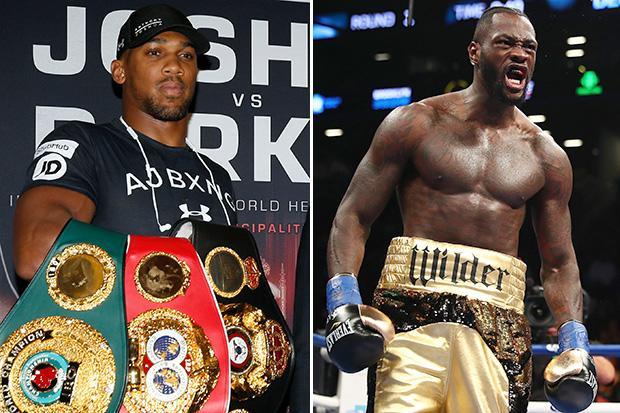 Share this on WhatsApp
Spread the love
By Esther Egbe
Deontay Wilder stated that Anthony Joshua is a nobody in America — and must fight him across the pond to become a superstar, National Daily learnt.
World heavyweight champion Joshua has hinted he does not need to fight in the USA because British boxing is booming National Daily gathered.
And the 28 – year – old British-born Nigeria suggested he would only consider such a move to “cement his legacy” in the sport.
Wilder taunted WBA , IBF and IBO champion Joshua ahead of his own WBC heavyweight defence against Luis Ortiz in New York on March 3 .
“ I need him and he needs me at the end of the day — unless he just does not want to unify.’ he said.
“ Unless he wants to stay over his side of the pond and let people gravitate to him and be a fake sign of what he says he is.
“But then he will never be a global icon . You will never be a worldwide figure without me . ”
And Wilder added , “ I’ m the most exciting , most entertaining fighter in the heavyweight division. Nobody in the heavyweight division is doing what I am doing . Nobody in history is doing what I am doing . ”
Joshua will fight WBO world champion Joseph Parker on March 31 in Cardiff to set up a winner – takes – all unification fight with Wilder.
But the ‘ Bronze Bomber ’ believes AJ ’ s promoter Eddie Hearn is avoiding talks over thrashing out a big – money fight deal having previously accused him of using stalling tactics.
Wilder said , “Everybody wants to see the fight . The only people that don’ t are his promoters.
“They already know how big of a risk this really is.
Share this on WhatsApp
Related Topics:Anthony JoshuaBoxingDeontay Wilder
Up Next