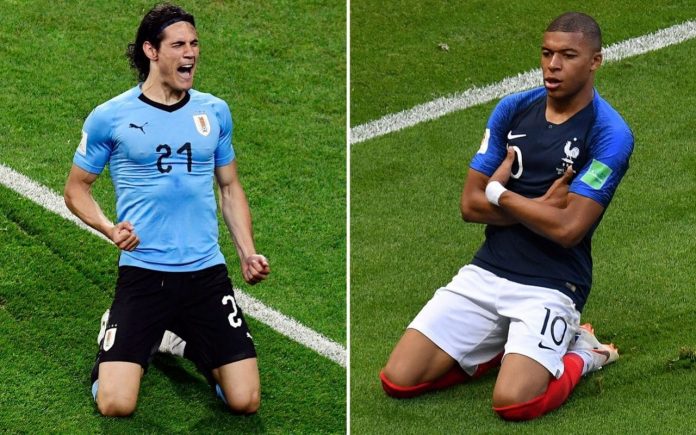 Ronaldo’s Portugal went home because to beat Uruguay you need to have a better Midfield than a quality attack. France seems to have a great squad of midfield and that solid midfield is complimented by a solid defense. It’s almost a given that France will win. But there is a Cavani and Luis Suarez scare.

Cavani faces a fitness test – losing him would be a major blow. But Didier Deschamps is still yet to find a balance in midfield and attack that really works and Les Bleus are a side that too often look less than the sum of its parts. Now they meet a Uruguay side who won’t give them space, who will defend deep and smother them.

Brazil looks like the Real Madrid of the World Cup. No fancy dominance, just dependable reliance on the key names dominating the team. A team that has Neymar, Coutinho, Paulinho, Willian e.t.c with a bench good enough to beat Belgium is indeed respected in Russia. But the Belgians are talented group of believers who have fantastic players good enough to make the Brazilian team. A Lukaku would surely make a Gabriel Jesus seat on the Bench in Brazil. Then a Hazard will ensure Willian doesn’t see many minutes in Tite’s side. You may want to look at the Japan-Belgium match from two sides: You could say Belgium got out of jail against Japan. And as such say they are weak, but if you consider the protagonist in the movie Jailbreak you will see Belgium as strong. So anything can happen.

Team Russia has stunned you before; they could actually stun you again. But who are the confronting? And who did they confront to get here? They beat Spain on penalties. Croatia would have beaten Spain. Funny cos, Croatia also had the hard luck of a Penalty series to get here. Would Denmark have given Russia such a trouble? No.

It will be risky, a giant risk, an Elephant-size Risk if you like, to say Russia will beat Croatia. But it’s a gambler’s call. Not an investor’s move. So you could attempt staking a 5k aside on a single betting that an upset would happen that will see Russia defeat Croatia. The head says Russia has come to it’s bus stop, the heart agrees.

If I want to think like the bookies would. I say this “how the hell did Sweden get here? But they are here all the same. And they did that with solid team work. They hold their own. Chances are if Emil Forsberg doesn’t come to the party, Sweden might not. Their challenge to knock out England is quite a tall order. Yet the surest thing here is an Over 1.5”.  But I do think Sweden’s heroics aren’t going to leave them just yet. There’s still a miracle to happen and England will be going home.