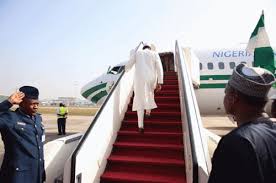 After spinning a “technical-stop-over-in the-UK story to cover a brief meeting with his UK doctors on his reurn from the US last week, President Muhammadu Buhari is going back to London on a four-day medical trip.

According to a statement on Monday by his Senior Special Assistant on Media and Publicity, Garba Shehu, the President’s trip on Tuesday is at the instance of his doctor.

“In the course of the technical stop-over for aircraft maintenance in London on his way back from Washington last week, the President had a meeting with his doctor.

“The doctor requested the President to return for a meeting, which he agreed to do.

“President Buhari will return on Saturday, May 12th.

Garba said on his return, the President’s two-day state visit to Jigawa State, which was postponed because of the All Progressives Congress’ ward congresses, will now take place on Monday 14th and Tuesday 15th of May.

But the PDP has described this back-and-forth as deception, urging President Buhari to stop lying to Nigerians about his health and other national issues.

The National Publicity Secretary of the party, Mr Kola Ologbondiyan, told the Punch that it was a pity that the President lied to Nigerians about the stop over he had in London a few days ago.

“Why did he lie that he merely had a technical stop over in London? He should take Nigerians and Nigeria seriously.

“He could be sick, but he should also know that Nigerians are the ones maintaining his health for him. So, he should tell them the truth all the time

Between February 5 and 10, 2016, Buhari embarked on a six-day vacation to London.

The president returned to Nigeria on June 19, 2016, after spending 14 days in London.

He again left the country on January 19, 2017, on what the Presidency described then as a medical vacation.

He then gave an indication that he would return to London for further check-up.

While he was away, Nogeria was tottering on the brink of anarchy because of what many described as improper handing over, which was a breach of the constitution.

“We also hope he has transmitted a letter to the National Assembly about this trip,” said Ologbodiyan.