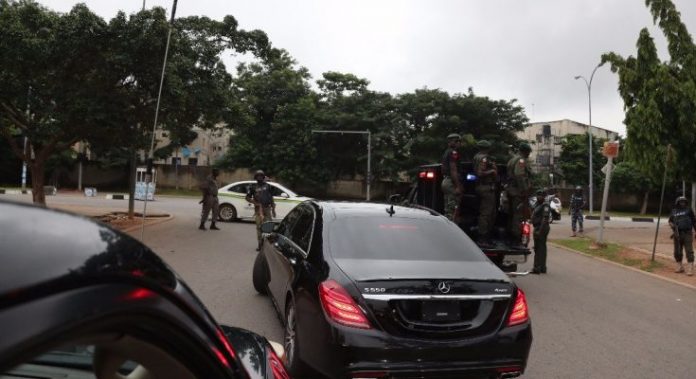 There is heavy Police presence at the official residence of the President of the Senate, Dr. Abubakar Bukola Saraki, in the early hours of Tuesday. As early as 7.30am, heavily armed policemen cordoned off all entrance and exit routes to the Senate President’s residence, restricting movement of persons and vehicles.

It is not yet certain whether the Police are placing Saraki on house arrest or they are there to effect outright arrest of the Senate President.

The Police had invited Senate President Saraki to report to the Headquarters Abuja to answer to allegations of being linked to the Offa bank robbery on the  claim that one of the suspects arrested and being interrogated mentioned him in his confession.

As the invitation generated public uproar of political persecution, the Police authorities later accepted written statement from Saraki without his appearance at eth Force Headquarters.

Saraki had in that statement denied any knowledge or link with the Offa bank robbery.