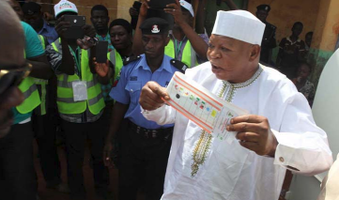 The gubernatorial candidate of the All Progressives Congress (APC) in Kogi State, Abubakar Audu who was reported to have died Sunday from undisclosed medical report will be buried tomorrow (Monday) in his home town by 10 am.

National Daily learned from the family source that he will laid to rest in his home Town Ogbonicha- Alloma, in Ofu Local Government tomorrow (Monday)by 10am

Prince Abubakar Audu, who was the first Governor of Kogi State was born on 27th of October 1947, to the family of His Royal Highness, the late Pa Audu Oyidi, Orego Atta of Igala Land and the paramount ruler of Ogbonicha-Alloma in Ofu Local Government Area of Kogi State.

He began his career as a bank worker, later preceded to London from 1975-1978 where he studied banking and personnel management, obtaining professional qualification as a certified secretary, and as a Fellow of the Association of International Accountants of London, as well as fellowship of the Chartered Institute of Industrial Administration of Nigeria.

The late Audu’s banking career lasted for a total of 25 years, which he spent with First Bank – formerly known and Standard Bank.

He made history as the first training officer of African descent and also as one of the first black senior management staff of Standard Chartered Bank in London and New York.

In 1991, he was appointed Executive Director of FSB International Bank PLC.

He joined public service in 1986 and was appointed as Commissioner for Finance and Economic Planning in the old Benue state. He served in this capacity until 1988 when the cabinet was dissolved.

He contested on the platform of the National Republican Convention (NRC) and won the election held in November, 1991.

He was subsequently sworn in as the first executive governor of Kogi state in January 1992.

In 1998, democracy was again re-introduced and Audu, now with the All Nigeria People’s Party (ANPP), was elected again with over 700,000 votes while his opponent hardly recorded 50% of the vote cast. He was sworn in on 29 May 1999 as the 2nd Executive Governor of Kogi State.

Until his sudden death, he was the leading Candidate in the Saturday (yesterday)Governorship Election under the APC.

He died on the 22nd November, 2015, while seeking re-election on the platform of Nigeria’s ruling party, the All Progressive Congress.