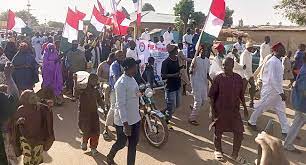 The All Progressives Congress (APC) was thrown into panic as youths in Katsina State decried the bad leadership in the ruling party, and engaged in mass rally mobilising support of the presidential candidate of the Peoples Democratic Party (PDP), former Vice President Atiku Abubakar, and his running mate, Dr Ifeanyi Okowa.

The youths had commenced the mass rally tagged ‘10,000 Reset Nigeria Rally’ from Goruba Roundabout, ending at Kanti-Kankia. The rally was convened by  the PDP New Generation, and was well attended by thousands of youths from several wards in Kankia Local Government Area (LGA).

The Director General of the PDP New Generation, Audu Mahmood, at the rally urged the youths to collect their permanent voter cards (PVCs) to enable them to vote for the right candidates to rescue Nigeria’s future.

He had said that the youths are tired of the APC bad governance and, therefore, prepared for change, being optimistic that youths will come out and vote massively for Atiku and other PDP candidates on February 25th and March 11th elections.

The D.G. had declared, “We are here to mobilise the youths in their thousands to walk round the Kankia Local Government in support of the Atiku/Okowa ticket and other PDP candidates in the state from top to bottom.

“We believe that the PDP from top to bottom are ready to rescue our future. From what we have seen here today, the youths in Kankia Local Government have confirmed to us that they are voting 100 percent for Atiku.

“So, I want to encourage the youths to go out and collect their PVCs to enable them the right to vote.”

The Katsina State Coordinator of the PDP New Generation, Abbah Sada, noted that Kankia is a PDP-dominated LGA and the district of a senator related to President Muhammadu Buhari, who had defected from the ruling APC to the PDP.

“PDP is very strong in Kankia. Even when the APC came for the governorship campaign, it was rejected in Kankia which was the beginning of its problem.

“Even in Charanchi where the APC governorship candidate comes from, APC has no place. And we are going to vote massively for the PDP here; Kankia is a local government where people decide on whom to vote,” he stated.

The youths burnt grooms in protest of the APC bad governance as they embarked on the solidarity rally.