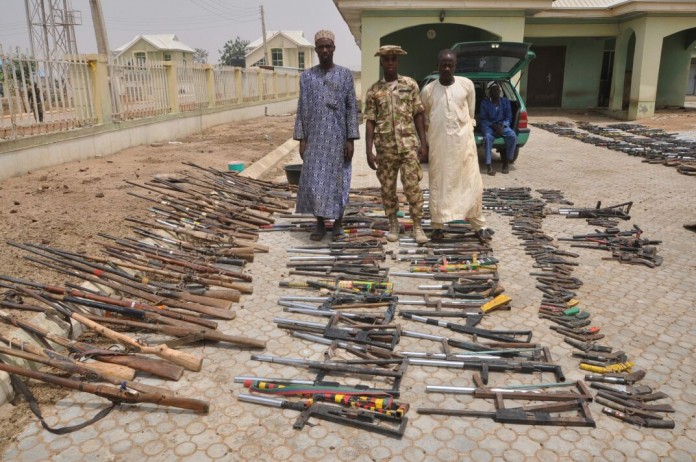 Share this on WhatsApp
Spread the love
By OKOSUN DENNIS
The peace process initiated by the Zamfara state government in conjunction with 1 Division Nigerian Army, is yielding dividend as repentant armed bandits and livestock rustlers have surrendered their weapons to the military in the State.
National Daily reliably gathered that the initiative started in 2016, culminating into large cache of dangerous weapons voluntarily handed over last Wednesday, 8th March 2017.
The repentant armed bandits and local vigilante group called “’Yansakai” based in Ruwan Tofa, ‘Yar Galadima and Babban Doka in Maru Local Government Area, Danwaren Daji in Tsafe Local Government Area, as well as Mada in Gusau Local Government Area of Zamfara State, turned in large quantities of dangerous arms and ammunition.
The arms included three AK-47 Rifles, one foreign made Pistol, 1,169 Dane Guns, 323 locally made Pistols, 54 X locally made revolvers, 102 locally made multi barrel Pistols and 22 X locally made double barrel Rifles.
National Daily further gathered that the weapons were handed to 223 Battalion, 1 Brigade Nigerian Army in the presence of some state government officials and representatives of the various heads of security agencies in the State.
It would be learnt that since the peace initiative started, in the last few months, over a thousand assorted weapons have been surrendered across the North West Zone.
Share this on WhatsApp